Use the Chipmunks and Chipettes to smuggle diamonds without being caught by the authorities (succeeded for a while; ultimately failed).

Kidnap Mario, the Chipmunks and the Chipettes and take them to Costa Rica to prevent the exposure of her and Klaus' plans (failed).

Claudia Furschtein is the main antagonist of the 1987 cartoon film The Chipmunk Adventure, the secondary antagonist being her brother, Klaus. She is the co-leader of a global, German-led smuggling ring and is determined to deliver diamonds to clients under as much concealment as possible.

She was voiced by the late Susan Tyrrell.

Claudia and Klaus tricked the Chipmunks into aiding them in smuggling diamonds across the world under the guise of a hot-air balloon race across the world, taking advantage of an argument between Alvin and Brittany after playing an arcade game based on the novel Around the World In Thirty Days.

Claudia and Klaus give each team (Chipmunks and Chipettes, respectively) small dolls in their images that they were to place at each location at which they arrived in exchange for dolls in the opposing teams' images as proof of their travels. The first team to arrive back at the starting point would win the race and be rewarded with a cash prize of $100,000.

What the Chipmunks and Chipettes don't know was that each doll was actually stuffed with diamonds, and that they would each be exchanged for dolls containing money (that was likely being used by clients to pay for the diamonds). Thus, they agreed to the terms, unaware that they were aiding the smugglers.

However, during their travels, the Chipettes became distracted when they discovered a baby penguin in Egypt and tried to take him back to his family. Upon henchmen of Claudia (who are unaware of this) reporting this to her, she believes that the girls had found the hidden diamonds and were trying to make an escape with them. Thus, when they diverted from their usual course, Claudia has her henchmen go forth to capture the girls and retrieve the diamonds. This, however, proves to be a costly mistake on her part, as it sets a chain of events in motion that would eventually lead to the unraveling of her plan.

Claudia's henchmen catch up with the Chipettes as they are delivering the baby penguin to its family in Antarctica. When the thugs try to take the dolls, the girls fight back, ripping one of the dolls in the process and revealing the diamonds. Luckily, the penguins, grateful to the Chipettes for returning their baby, fight off the thugs with snowballs.

After seeing the diamonds in one of their own dolls, it does not take long for Brittany, Jeanette and Eleanor to realize that there could also be something in the Chipmunk dolls. They open one and find the money being used to pay for the diamonds, and Jeanette realizes the true intent behind the "race." Now aware of what is happening, the Chipettes head off to find the Chipmunks, and after rescuing them from Fijian natives intending to sacrifice them to hungry crocodiles, the two groups fly back as one to Los Angeles, with the Chipettes telling the Chipmunks everything off-screen.

Elsewhere, Claudia, after hearing nothing from her henchmen, grows more and more irritated at the idea of her plot being exposed. She throws and breaks a vase and blames it on her dog, Sophie (who is clearly irritated at this), when Klaus, who was awakened by the crash, expresses his concern over his sister's distress. Claudia is about to reassure her brother that all is well when she notices her phone light ringing, indicating that someone is using it. It turns out to be her butler, Mario, whom she overhears on a phone call with Inspector Jamal, a federal inspector who has been monitoring Claudia and Klaus' activities for some time and was aware of them using the Chipmunks and Chipettes for their smuggling operation. Mario promises to meet Jamal at the airport upon hearing that the Chipmunks and Chipettes are heading in that direction. Now knowing that her butler is an informant for Jamal, which explains how he (Jamal) was getting wind of her and her brother's plans, Claudia busts Mario and, likely with Klaus' help, takes him hostage.

At the same time, Dave arrives home to the airport and hears Alvin's cries for help. Inspector Jamal runs up, identifies himself, and he and Dave begin to give chase in his 1987 Chevrolet Caprice. But two other cars crash into each other and block them off at an intersection. While it at first appears that Claudia and Klaus will escape on a private jet to Costa Rica, and likely take Mario and the six children with them as prisoners to prevent them from telling the authorities about the diamonds, they are accidentally run off the road by none other than Miss Miller, who is heading to the airport to pick up Dave. Claudia and Klaus are then arrested and taken away by the police. 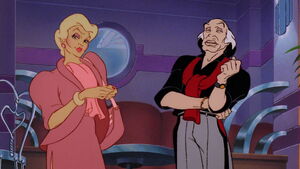 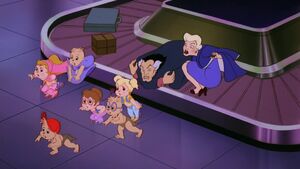 Claudia and Klaus trying to stop the Chipmunks and Chipettes from escaping. 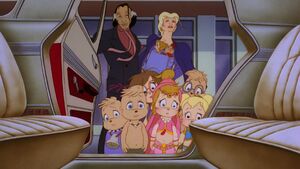 Claudia and Klaus kidnapping the Chipmunks and Chipettes. 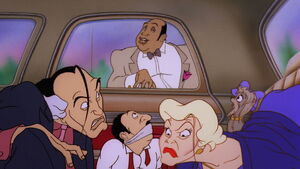 Claudia and Klaus' defeat and arrest.
Add a photo to this gallery
Retrieved from "https://villains.fandom.com/wiki/Claudia_Furschtein?oldid=3841670"
Community content is available under CC-BY-SA unless otherwise noted.