Murder in the Alps

Kidnap Professor Charles Clark and force him to work for the Nazi party.

Avoid being arrested for her murders (both failed).

Murderous Nurse
Claudia Perret is the main antagonist of Deadly Snowstorm, the first chapter of the Murder in the Alps game. She is the murderess whom the protagonist Anna Myers must expose among several other suspects. In the next chapter called The Phantom, Claudia becomes a murder victim herself.

Claudia was born in Munich as a Kopp, but she took the last name Perret when she was married in France. She divorced her husband, but continued presenting herself as a Frenchwoman named Claudia Perret. She then returned to Germany and joined a covert operations group that aimed to bring the Nazi Party to power. She also started working as a nurse for Christian Petersen, a wealthy industrialist from Munich with a lot of connections.

In the covert operations group, Claudia worked in the unit that dealt with Oriental religions, occultism, and their connections to Nazi symbolism and power. Her first task focused on Charles Clark, a Scottish professor of archaeology and expert of Vedism who had discovered the recipe of soma, an ancient Vedic elixir that supposedly grants immortality. Claudia was tasked with kidnapping Professor Clark and forcing him to work for the Nazi Party. When he booked in the remote Hotel Reger in the Swiss Alps in December 1932 on his way to a conference in Heidelberg, Claudia convinced the ailing Mr. Petersen to take a short holiday there. She also had an accomplice named Helmut Grass who remained in the nearest town to Hotel Reger, keeping in touch with headquarters. He and Claudia communicated over the distance by using mirrors and a secret variation of Morse code.

The murders of Hotel Reger

When Claudia, Mr. Petersen and Professor Clark book in Hotel Reger, there are eight individuals along with them: the hotel owner Otto Reger, a Swiss priest Father Hans Lenz, an Italian opera singer Giovanni Rossi, an American realtor Walter McCain, a medical doctor Max Hartmann, a physics professor Adam Kinsky, a Swedish secretary Ulla Lund, and the journalist Anna Myers from Zürich. Since Claudia has no prior knowledge about Professor Clark's appearance (with the presence of another professor complicating this), she has a look at the guest photo album before tearing the photos out of it and stealing the hotel keys.

On the evening of 3rd December, 1932, Anna Myers arrives as the last guest to the hotel during a snowstorm. Claudia in turn breaks into Professor Kinsky's room and goes through his luggage. He catches her red-handed and threatens to report her to the police and everyone else in the hotel. She kills him by injecting acidic substance into him and leaves his body in the locked room, making it look like he has died of a heart attack. When everyone else but Professor Kinsky are at the breakfast table, Claudia pretends to remember that he had complained about his heart yesterday. He is discovered in his room, but because of the yesterday's blizzard, the telephone lines are dead, and the only road to the town is covered in snow, cutting Hotel Reger off from outside world.

That same day, Ulla Lund confides in Claudia. Having worked as a nurse in her youth, she found Professor Kinsky's heart attack to be suspicious. She tells Claudia that she discovered on his neck the puncture mark left by Claudia's syringe and plans to discuss this with Dr. Hartmann. To prevent this, Claudia kills Ulla in the latter's room the same way she killed Professor Kinsky. Ulla's body is discovered later that evening, but the puncture marks left by the syringe are now found both on her and Professor Kinsky's necks. This leads Anna, Otto and Walter to suspect Dr. Hartmann due to his medical knowledge.

On the morning of 5th, Dr. Hartmann looks around to shed light upon Professor Kinsky and Ulla's deaths. He ends up discovering instead that Otto and Father Lenz use the hotel to run a smuggling operation. He sends notes to Anna and Walter, asking them to meet him at eleven o'clock in the backyard so that he can show them the smuggled cigarettes stored in the cellar. Claudia knows Dr. Hartmann has discovered something, but not that it is unrelated to the murders, so she decides to eliminate him. Not having time to stage a third heart attack, she steals Mr. Petersen's 7.65 Mauser and uses it to shoot Dr. Hartmann at the cellar door. Walter discovers the body first, and Anna finds him standing over Dr. Hartmann's body with his own gun visible. This leads to Anna having suspicions about Walter, but she decides to reserve her judgement. Meanwhile, Claudia hides Mr. Petersen's gun in Professor Kinsky's luggage and the gun case in Giovanni's room. She also ransacks Giovanni's luggage, stealing his Italian shoes, and hides Professor Clark's passport in the cellar. Now everyone knows there is a murderer among them.

Later that evening, Claudia decides to remove any suspicions from herself. She screams for help from her room, with Walter being the first one to arrive. Pretending to be scared out of her wits, she claims someone she could not identify attacked her. Anna searches Claudia's room and finds Dr. Hartmann's medicine chest. She discovers that the syringe (which she found earlier in Dr. Hartmann's room) used in the first two murders is from it. When Anna asks Claudia if the latter has had visitors, the nurse tries to improvise by claiming that Dr. Hartmann was in her room while she was on a walk yesterday. This explanation has a flaw which catches Anna's attention: Dr Hartmann resided on the first floor, and since he was wheelchairbound, he could not have come to Claudia's room on the second floor.

A short while later, Claudia meets Anna and Otto at the reception and tries to arise suspicions in Walter by pointing out how quickly he arrived in her room and saying that like Mr. Petersen's Mauser, his gun is custom-made. Anna then goes to check the cellar again, so Claudia sneaks after her while wearing Giovanni's stolen shoes. She turns off the lights and locks Anna in the cellar. After Anna breaks out, she finds at the cellar door fresh prints left by a man's shoes. Around this time, Mr. Petersen starts suspecting Claudia, confronting her, and demanding an explanation from her. She takes him to the backyard where she stabs his chest with a knife. She then drags his body as far away as she can down a mountain path. She also smashes Giovanni's gramophone record that was unreleased because of Mr. Petersen, scattering the pieces near the cellar door. She then spends the night with Giovanni in his room.

On the morning of 6th, the hotel's residents search for Mr. Petersen and find his body on the mountain path. With fake tears, Claudia claims that Mr. Petersen committed suicide because he loved her and she could not return his feelings. She later accompanies Anna and Otto in searching the cellar and Walter's room. They then meet him and Professor Clark in the latter's room. Walter reveals he knows that when Otto asked earlier that day if everyone had spent the last night in their rooms, both Claudia and Giovanni lied when they said they had because Walter knows that Claudia's room was empty that morning. Claudia gives a sob story about how frightened the murders had made her, leading her to seek comfort in Giovanni and Mr. Petersen to kill himself because of this. With Giovanni's absence and broken record, the suspicions turn towards him.

Later that evening, Giovanni is found drunk in the cellar. He gives vague answers to the others' questions, so he is tied up in one of the dining hall's chairs. Anna finds the gun case of Mr. Petersen's gun in Giovanni's room and discovers that the shoe prints left at the cellar door were made by Giovanni's stolen shoes. With the evidence pointing towards Giovanni, he is left gagged and tied up in the dining hall. However, Walter is not convinced that Giovanni is capable of murder and keeps suspecting Claudia. At night while Giovanni and everyone else are asleep, Claudia stabs Walter and leaves his body on the dining hall's table.

On the morning of 7th, Claudia's scream draws everyone to the dining hall. Giovanni is released from the ropes, for he could not have killed Walter while tied up. Now that the phone lines are working and the road is being cleared, Otto wants Anna to find the killer before they can escape. While Otto keeps everyone else in the dining hall, Anna makes the last searches in a cabin near the mountains as well as two guest rooms.

Having found all the evidence she needs, Anna tells everyone what motives each of them could have had for killing at least one of the five murder victims. Knowing the police are on their way, Claudia tries to go back her backs, but Anna stops her and reveals her background and actions in great detail. Claudia keeps denying everything throughout Anna's exposition. In the midst of this, the telephone rings. Anna answers it, and the caller, Helmut Grass, asks her to tell Claudia that "the plans have changed". Claudia denies knowing him. When Anna finishes her exposition, the police arrives. Claudia refuses to say anything without a lawyer. She is then arrested and taken to the town's prison.

The hunter becomes the hunted

On 8th December, 1932, Anna arrives in the town where Claudia is imprisoned to give a statement about her and the murders. She and the local police chief find Helmut Grass murdered in the market. They also discover that someone has broken into Claudia's cell and murdered her. Both victims have been stabbed to death with sacrificial daggers (that are actually cheap replicas) stolen from the local antique shop. There are also Hindu symbols carved on their arms, and Anna finds in Claudia's luggage one of Professor Clark's works (that belonged to Walter). This leads Anna and the police chief to suspect Professor Clark.

When Professor Clark arrives the next day, he confirms that the Hindu symbols on Claudia and Helmut are Shaivist, not Vedic which is his expertise. Which some further digging, Anna deduces that before Claudia was arrested, her superiors had come to the conclusion that she had failed in her mission to kidnap Professor Clark, so they sent an assassin to kill her. Helmut tried to warn her to run, but since he could not reach her, he ended up making the telephone call which Anna answered. The assassin infiltrated the police force (which composed of both the local and the city police, leading both groups to think he was from the other group) that arrived at the hotel. He murdered Claudia and Helmut while trying to frame Professor Clark for it and cut the town's electricity that same evening, escaping into the dark of the night. 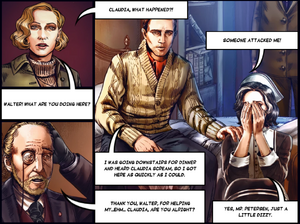 Claudia Perret pretending to have been attacked. 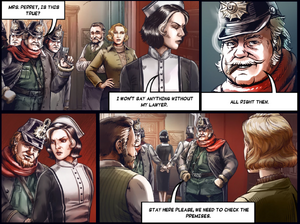 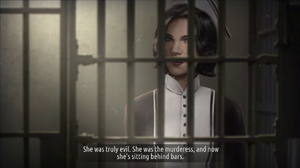 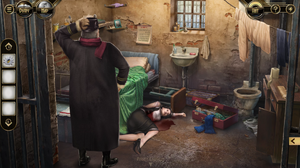 Claudia Perret laying murdered in her cell.
Add a photo to this gallery

Retrieved from "https://villains.fandom.com/wiki/Claudia_Perret?oldid=4155362"
Community content is available under CC-BY-SA unless otherwise noted.