Claudio is a devoted Italian member of the dangerous cult known as Fiamma Nera and an antagonist in Tomb Raider II.

He was voiced by Simon Greenall.

Claudio and the other Fiamma Nera cult members set up a camp outside the entrance to the Temple of Xian where Lara would later be ambushed by him.

The ambush failed though, Lara repelled him and aimed her pistols at him. Claudio explained about the Dagger of Xian and the leader of his cult, Marco Bartoli. For speaking of all, this he poisoned himself. Lara then explored his laptop and found out about the Italian magician Gianni Bartoli and his history in Venice including the founding of Fiamma Nera themselves. 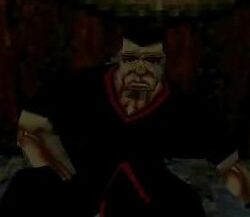 Retrieved from "https://villains.fandom.com/wiki/Claudio_(Tomb_Raider)?oldid=3288310"
Community content is available under CC-BY-SA unless otherwise noted.