To destroy the U.S. State Department to avenge his daughter's death (failed)

Claudio Perrini is one of the two main antagonists (alongside his wife Selena) of the 2002 film Collateral Damage.

He is portrayed by Cliff Curtis.

Claudio, known as 'The Wolf', is a terrorist who bombs a plaza of the Colombian Consulate building in Los Angeles in retaliation for America's oppression of Colombia. An LAFD firefighter named Gordon Brewer witnesses the deaths of both his wife and son amidst the explosion and seeks revenge on Claudio, eventually tracking him and his fellow guerrillas to Mompos. Claudio eventually captures Brewer and attempts to hold him for ransom, but Brewer escapes and learns from Selena that he is plotting another attack in Washington D.C.. However, it turns out that Selena is in league with Claudio, and that their real target is revealed to be the State Department, as they plan to destroy it to avenge their daughter, who was tragically killed in a attack ordered by the State Department. However, Brewer manages to stop thw two and confronts the two in a tunnel beneath the building. After Brewer kills Selena, Claudio knocks Brewer to the ground but he manages to grab a fire axe lying nearby and hurls it into Claudio's chest. Gasping in shock, Claudio collapses on the ground and dies. 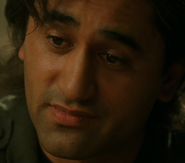 Claudio with an axe in his chest
Community content is available under CC-BY-SA unless otherwise noted.
Advertisement