Claudius is a lion who makes his first and only appearance in the Timon & Pumbaa episode "Rome Alone".

Claudius is pitted against Simba after he was captured by Quint's gladiators. He was the current champion of the Roman Arena since he apparently never lost a fight in his life. He was supposed to be pitted against Simba because the lion was seen as weak since he wouldn't devour his friends.

Timon and Pumbaa visit Claudius during the night before the fight and try to stop the conflict from happening. They try blackmailing, getting even, ripping out his teeth so he can't fight, feeding him salad, but nothing works. When Claudius loses his patience, he throws them away from his cage.

However, the next day, Claudius falls asleep during battle due to Timon and Pumbaa disturbing him all night. Timon also gives Claudius the bottle of milk which he drinks. Claudius' later fate is unknown after this.

Not too much is known about Claudius, beside the fact that he is a very mean, vicious lion who supposedly never lost a fight in his life. He also appears to have a short temper since he quickly loses his patience towards Timon and Pumbaa due to them disturbing him all night. It can be assumed that Claudius likes sleeping. 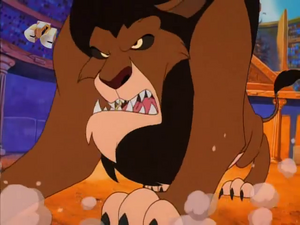