Spending time with Lucas (before he was brainwashed).

Kill the Mecha Drago to avenge his mother (before he was brainwashed; failed).

Kill Lucas and his crew to help Porky Minch destroy the world (after being brainwashed).
Pull the seven Needles (formerly)
Reunite with his mother in Heaven (succeeded).

Terrorism
Pulling three of the seven needles on Porky's behalf

The Masked Man is the secondary antagonist of Mother 3. He is one of the top commanders of the Pigmask Army (alongside Fassad) who is controlled by Porky Minch to serve him. Since he uses PK Love, he is the only one who can pull the seven needles, besides the game's protagonist, Lucas.

At the end of Chapter 8, it is revealed the Masked Man is actually Claus, the son of Flint and Hinawa, and the older twin brother of Lucas. After he reveals his true identity, Claus commits suicide to join his mother, Hinawa.

Claus is shown to be more energetic and braver than Lucas. He was kind and loved his family deeply, until the death of his mother Hinawa caused him to fill his heart with hatred. He left Tazmily Village to kill the Mecha Drago, the one that killed his mother.

When he becomes the Masked Man, he loses his sense of self and memories and refuses to let anyone defeat Porky. He becomes soulless and almost speechless.

During the final battle, the Masked Man realizes his true identity as Claus, and ultimately kills himself.

As a twin, Claus looks identical to Lucas; Before being brainwashed, Claus wore clothes that are similar to his brother's; with opposite colors: cyan and yellow. Unlike Lucas (who has blond hair), Claus has red hair in a similar style to Lucas'. He wears orange pants, white socks, cyan-white shoes.

After he was brainwashed by Porky, Claus appears to have become paler and wears an entirely different uniform. He wears a black-gray coat resembling a fur collar bomber jacket with a belt around his waist, orange trousers, a pair of white gloves and black-gray boots. He wears a large gray helmet which obscures his eyes, with a shadow from the helmet hiding his left eye, while a gray eye-piece covers up his right. Due to his cyborg transformation, Claus uses a jetpack in the shape of wings which he can simply turn on at his own will, while his right arm frequently uses an arm cannon with tubing attached to either the jetpack or his own back itself. Whether the arm cannon is detachable or if Claus' right arm is actually cybernetic, in which it can transform into an arm cannon, is unclear.

Claus was a more courageous and energetic child than his twin Lucas but shared his brother's kindness. After Claus' mother, Hinawa, was killed by a Mechanical Drago constructed by Porky Minch and his army, he leaves Tazmilly Village and ventures into the canyons to find and kill the beast to avenge his mother's death. Claus' father, Flint, hears of this and leaves the village to look for Claus. Flint encounters and defeats the mechanically reconstructed Drago that killed his wife, but Claus is nowhere to be found. He is presumed dead by the rest of Tazmily Village but Flint never gives up hope and continues searching for his son routinely for the next three years.

In actuality, Claus was beaten within an inch of his life by the Drago when he was found and captured by Porky and his Pigmask Army. Porky's ultimate goal was to have the seven Needles pulled to have the world "reborn" in his own image, but he did not possess the power to pull them. Porky saw the potential in Claus and had him killed and reconstructed with robotic attachments, burying his memories deep inside of him. Breaking his will and his mind, Porky turned Claus into the commander of the Pigmask Army: The Masked Man.

The Masked Man was set to work on pulling the Needles on Porky's behalf, but it would seem that the Masked Man had neither good nor evil intentions, as the Magypsies, guardians of the Needles, noted that the puller seemed to have no heart.

Lucas was the only other person capable of pulling the Needles. The Masked Man and Lucas engage in a race to pull the Needles and both manage to pull several. After defeating Porky, Flint tells Lucas the true identity of the Masked Man: His twin brother, Claus. Lucas encounters the Masked Man who is about to pull the final Needle. Lucas and his friends confront the Masked Man before he fires a bolt of electricity, knocking everyone but Lucas unconscious due to his Franklin Badge, which possesses the power to deflect lightning.

Throughout the battle, Lucas can't bring himself to attack his brother. The Masked Man unrelentingly assaults him with his sword and arm cannon. Hinawa's voice calls out to the Masked Man, urging him to end the battle. His mother's voice initially does not faze him and neither does his father Flint who intervenes in the fight but also fails to reach his son. As Hinawa's voice continues speaking throughout the fight, the Masked Man is eventually overcome by his buried memories and emotions. In the end, the Masked Man realizes his true identity as Claus, regains his humanity and removes his mask. Claus looks at his brother before firing an intense bolt of lightning at him, fully knowing that the Franklin Badge would deflect it back at Claus. Though mortally wounded he had enough strength to share his final moments with his brother. Claus apologizes and thanks his brother and father for freeing him. Before "going to that place where Mom is", Claus assures Lucas that they will meet again. Claus draws his final breath and dies in his brother's arms.

Claus appears in Super Smash Bros. Ultimate as two primary spirits: his regular spirit which is a legendary neutral type, and the Masked Man which is an ace attack type. As Claus, his spirit battle is against Lucas on the Battlefield form of the Garden of Hope stage. When defeated, Metal Lucas, based on the Masked Man, appears wielding a Beam Sword with increased power. As the Masked Man, his spirit battle is a stamina battle against Lucas on the Ω form of the New Pork City stage with increased attack power and a fast Final Smash meter. When equipped, he increases sword-based attacks. 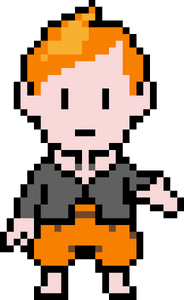 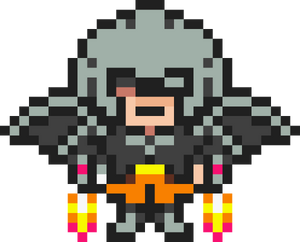 The Masked Man in flight mode.

Claus' timeskip sprite (Only seen during the credits). 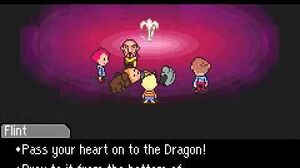 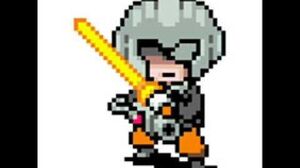