Member of the 8 Bit Club

Defeat Mario and his allies (failed)

Clawgrip is a boss and supporting antagonist in Super Mario Bros. 2 and its remake Super Mario Advance. He is one of Wart's generals and a member of the 8 Bit Club.

Originally, in Yume Kōjō: Doki Doki Panic, his boss fight was originally in place with a cream white Mouser. However, it was deemed to difficult, and was replaced with Clawgrip. Clawgrip first appears in Super Mario Bros. 2, being fought as the boss in World 5-3. Clawgrip attacks the player by throwing boulders at them. In order to defeat Clawgrip, players need to grab the boulders and throw them back on him five times. In the remake, Super Mario Advance, instead being a giant crab in the beginning of the battle, he was originally a Sidestepper. Clawgrip is grown to his giant size when engulfed by several bubbles which resemble that of Wart's.

Clawgrip appears as a minor antagonist in the Super Mario Bros. Super Show!, where he, along with Mouser, Tryclyde, and Fryguy is a minion of King Koopa rather than Wart.

Rather than being a single character, Clawgrip is portrayed as a species, whom seemed to work for King Koopa.

Clawgrip is a large, overgrown Sidestepper with a yellow belly, giant claws, and pinchers. In the Super Mario Bros. Super Show!, Clawgrip is shown wearing a blue bandanna on his head. According to his original description, Clawgrip can "grow suddenly", which is only present in Super Mario Advance. 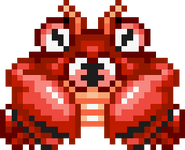