High-ranking member of the Beast Pack

Queen of the animals

Find out why Leongar is acting strange (succeeded)

Clawroline is a major antagonist in Kirby and the Forgotten Land. As a high-ranking member of the Beast Pack, Clawroline makes her first appearance in World 3, Wondaria Ruins, where she is a boss.

Before the events of the game, Clawroline went by the name "Carol". She and Leon were the animal kingdom's leaders. One day, Leon found Specimen ID-F86, resulting in his mind being controlled by the malevolent being. Carol, at this point, underwent a name change to Clawroline, and Leon, renamed Leongar, roped her into the Beast Pack as an elite. At this point, she took over Wondaria circus.

Upon being defeated by Kirby, Clawroline disappears from the story. She is later revealed to have survived, however, and saves Elfilin after the latter uses his powers to save Popstar and the Forgotten Land. She and the gang revive Leongar by restoring fragments of his shattered soul, after which he reawakens from his slumber and Clawroline embraces him.

In battle, Clawroline swipes with her claws for her main attack. She can also create shockwaves. Upon being reduced to half HP or less, she climbs high and throws knives.

Clawroline is an anthropomorphic leopard who has gold and beige fur. Her eyes are yellow with narrow black pupils. She has a slender body with an hourglass-like figure. 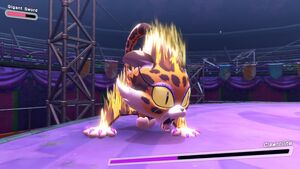