Saints Row IV DLC How the Saints Save Christmas

Kill The Protagonist, Shaundi, and Santa Claus (both failed).

Clawz is an evil warlord and the main antagonist of the Saints Row IV story DLC How the Saints Save Christmas.

After the real life Santa Claus is kidnapped by alien warlord Zinyak, he was placed within a nightmare simulation in which broke him down over the next few decades. Brought to nothing, Zinyak took the darker parts of Santa's mind and created that of Clawz, whose objective is to destroy the holiday season, that is Christmas.

Clawz arrived at Santa's workshop in the North Pole with the idea of destroying Christmas and got the elves there to create weapons in which he delivered to children throughout the world and enslaved them.

In the future, Clawz dominated the earth and the Saints sent back Shaundi via time machine to prevent Clawz attack. She teams up with The Protagonist and they enter into Santa's simulation to save him.

After rescuing Santa, they head to the North Pole to help the elf residence to help Mrs. Claus. They then arrive in Steelport on Christmas Eve and deliver presents to the good boys and girls of the city in order to boost the Christmas spirit and weaken Clawz.

Clawz is then seen in Loren Square, grown to monstrous proportions. The Protagonist begins to spread Christmas spirit by giving presents to people around the square, and when Clawz is at his weakest the Protagonist attacks him and impales Clawz on top of a Christmas tree, and he turns into a star. This changes Future Shaundi's timeline in which Clawz was not the dominant ruler. 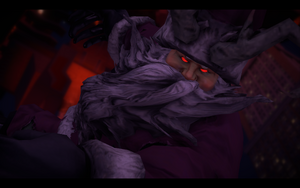 Clawz in his boss form.