Clay Parker is an antagonist in the first season of The Flash. He is a criminal busted out of prison by his girlfriend Shawna.

He is portrayed by Micah Parker.

Parker is busted out of prison by his girlfriend Shawna Baez, who became a meta-human during the explosion of the Star Labs particle accelerator. Though Shawna wants to use the opportunity to flee from the city, Parker claims that he cannot leave as he still owes a lot of money to Marcus Stockheimer. With help from his father, Barry finds out that as a member of Stockheimer's crew, tradition demands it that Parker pays a visit to Stockheimer after leaving prison.

To pay back Marcus, Shawna and Clay rob a money transport. While Clay watches the drivers, Shawna puts the money into the escape car. While doing so, she is confronted by the Flash. To escape him, Shawna teleports up a building. Barry follows her, but when he arrives on top Shawna teleports down again. Barry follows her but upon arriving is almost shot by Clay. Though Barry manages to catch the bullet, he is thrown to the ground. Shawna uses this oppurtunity to run to clay and teleport them both away with the money.

Shawna and Clay meet with Marcus in a warehouse to pay Clay's debts. After giving Marcus the money, Shawna reveals her powers to Marcus, which awes him. Marcus claims that after this reveal, their partnership would definitely need to continue. The warehouse is then raided by the SWAT and Clay is shot. Shawna teleports away with the wounded Clay.

Shawna and Clay then rob another money transport, with Shawna teleporting into the moving vehicle and leaving it with the money. When she sees the Flash following her she teleports in front of him, asking him why he cares what they do. She then attacks Barry by teleporting behind him and attacking him. In the ensuing battle, Clay drives off and Shawna teleports into her car. Knowing that Shawna can't teleport when she can't see, Barry destroys every source of light in the tunnel. When Barry enters the car, he apprehends Shawna but Clay, who left his girlfriend behind to escape, remains on the loose. 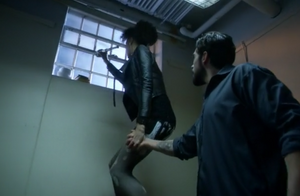 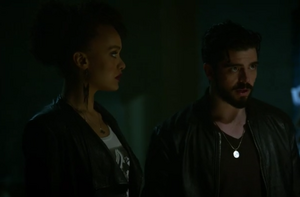 Shawna and Clay pay Stockheimer back