Guardian of the Circle of Lust

Being with Marc Antony.

Aid Lucifer with his goals.

Cleopatra is a major antagonist in the video game Dante's Inferno. She acts as the boss of the Circle of Lust, along with her lover Marc Antony.

She was voiced by Alison Lees-Taylor.

After her death, Cleopatra was transformed into a demon of Hell and became the guardian of the Circle of Lust. She made a deal with Lucifer, so that her lover, Marc Antony, could be with her forever. As Dante arrived in Lust, Cleopatra appeared and called forth the storms of lust around the Carnal Tower in the center of the circle. As Dante went up the tower, the queen of lust sent her minions to attack Dante and almost succeeded in killing him when she slammed her fist into the elevator platform he was riding on. Eventually Cleopatra managed to hold down the platform and sent in her minions to attack Dante again, but he managed to blast her with jets of flame, forcing her to let go and allowing him to get to the top. After Lucifer left with Beatrice, Cleopatra appeared before Dante and mocked him for breaking his vow to Beatrice. She then released Marc Antony from inside her and he began battling Dante, while she supported him with her own attacks and magic. However, as the crusader succeeded in defeating Antony, Cleopatra shrank down to normal size and cried over him. She then attempted to seduce Dante in an attempt to defeat him, but failed and was stabbed through the chest with his scythe. In doing so, Dante gained the unholy magical ability "Lust Storm", which created a spherical field of lightning that he could use both offensively and defensively in combat. 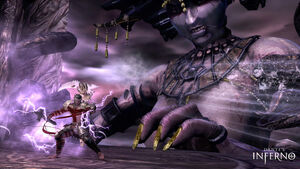 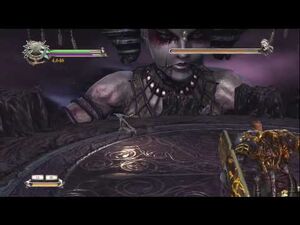 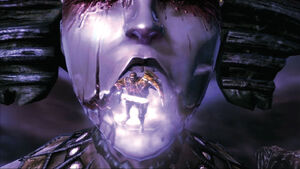 Cleopatra summoning Marc Antony
Add a photo to this gallery

Retrieved from "https://villains.fandom.com/wiki/Cleopatra_(Dante%27s_Inferno)?oldid=4339484"
Community content is available under CC-BY-SA unless otherwise noted.