Killing those who enter his shop.
Drinking alcohol.

Kill those who enter his gun shop.

Survive the zombie apocalypse (all failed).

Cletus Samson is one of the bosses or psychopaths featured in the 2006 video game Dead Rising. He is also an optional boss in the main mod 72 Hours, which can be found on the first day at 3 p.m. in North Plaza in the Huntin' Shack gun shop during the unannounced scoop "The Gun Shop". He is a gun shop owner with great suspicion and paranoia who, due to the zombie apocalypse, has locked himself in his shop, refusing to help others and threatening to shoot them if they get too close, believing that others want to kill him and steal his guns.

He was voiced by Bill Farmer.

On September 19, at 3 p.m., Frank West, while walking down the North Plaza, ends up in a gun shop, where he sees a rather dangerous situation.

Inside the store, Frank witnesses a survivor named James Ramsey trying to reason with the gun shop owner that other survivors need weapons to fight the zombies. Enraged, Cletus males a warning shot at the ceiling, telling him not to get too close to him, as he neither trust zombies nor people. Cletus also says that if he gets too close, he will shoot him. James ignores Cletus' threats, believing that the owner will do nothing to him - nothing could be more wrong. Cletus shoots him straight in the stomach and the force of the blow knocks James out of the store. Cletus regretted doing this, telling him that he had warned him and then points the gun at Frank, telling him that he cannot trust anyone in such a situation.

After the fight, the defeated Cletus falls to the floor and surrenders. He is downright terrified because he thinks Frank wants to avenge the killed James and seize all his weapons for himself. Cletus pleads with him to let him go, then runs away from the store in panic, ignoring Frank's call not to run away. Unfortunately, Cletus runs straight into the zombified James, who knocks him to the ground and then bites him right in the neck, killing Cletus on the spot and Frank lowers his head knowing that Cletus didn't want to do anything wrong and could have been saved.

In the canonical version, Cletus dies and cannot be saved, but in the Wii version Dead Rising: Chop Till You Drop, Cletus can be saved. If Frank saves him, Cletus becomes a survivor who stays in his shop selling weapons and repairing the broken ones. 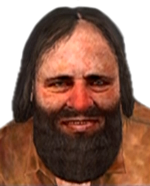 A photo of Cletus in Frank's notebook. 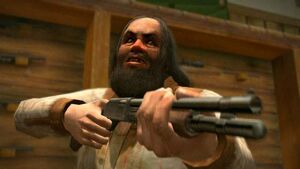 Cletus aiming his gun at James and Frank. 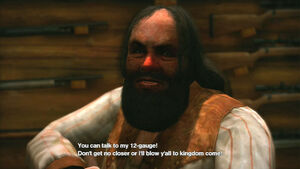 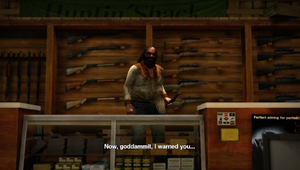 Cletus in his store. 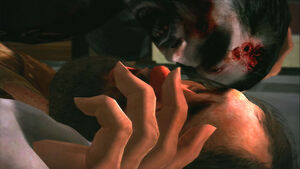