Clevetron is a one-time villain from the FOX animated sitcom The Cleveland Show, only appearing in the episode "Wide World Of Cleveland Show". He is a robotic version of Cleveland Brown, built by himself and the guys, so he could pose as him for his son's hot dog eating competition.

He was voiced by Kevin Michael Richardson, while his original counterpart is voiced by Mike Henry.

At Stoorbend Hi-Karate Schoor, Clevetron watched Junior win the contest and showed great honor in him. Junior was quick to catch on to how he wasn't his real father and called him out on his falsehood. Clevetron felt offended, wishing to be loved by someone for who he is, and threw a robot tantrum. This caused the school to go into a panic, while he destroyed things and killing people.

The real Cleveland felt guilty about refusing to see his own son's eating contest and went to the school out of guilt. He came in just in time to stop Clevetron. They built up for an epic anime fight, which simply ended with Cleveland turning off Clevetron.

Clevetron is based off of Cleveland Brown and Optimus Prime, having the same basic frame and physical features of Optimus, but with Cleveland's face and color scheme, with a yellow upper body and blue legs to match his shirt and pants, respectively.

Despite being a robot, Clevetron has a wide array of emotions including familial love, anger, rejection, and even some implied homosexual urges to have butt sex with his creator. 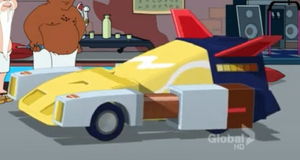 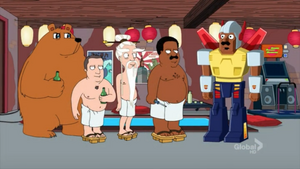 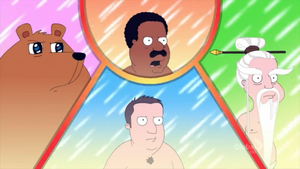 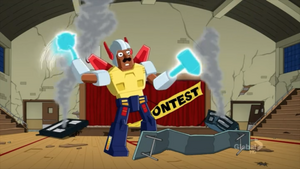 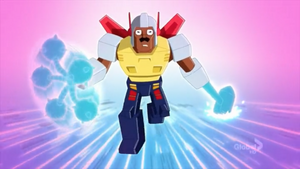 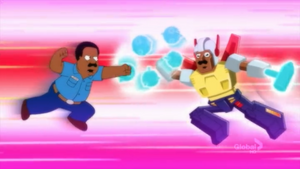