Planning on taking down the Ewings.

Trying to get revenge on J.R.

Take down the Ewing family.

Cliff Barnes is the anti-villain and one of the main antagonists of the American soap opera series Dallas, appearing in both the original 1978-1991 series, and then the 2012-2014 revival. He is the most recurring rival of the protagonist J.R. Ewing and unsuccessfully attempts to bring him down on several occasions.

Whilst Cliff's early intentions to bring down J.R. is somewhat noble due to feeling his father Digger was conned out of what he was owed and that Ewings lived off the wealth, he later developed into a far more sinister and ruthless character in the revival series, as he would stop at nothing to destroy the Ewings despite ending up better off than them wealth and influence wise.

He was portrayed by Ken Kercheval.

Cliff Barnes was born to alcoholic Digger Barnes. The Barnes family had a feud with the powerful Ewing family, as Digger felt cheated by the head of the Ewing Family Jock Ewing. Cliff grew up to believe that Ewing Oil was the Barne's birthright and decided to make it his goal to continue his father's legacy.

Cliff had scrapes with Jock Ewing's son J.R. Ewing. Cliff's sister Pamela had married to Jock's youngest son Bobby Ewing, which caused more problems between the Ewings and the Barnes.

Every time Cliff felt he succeeded in beating J.R., he was always defeated in the end and the tables turned on him, which showed him up.

By the end of the series, Cliff got hold of Ewing Oil, while J.R. had lost everything including his family (expect Bobby). Cliff appeared in J.R's dream which would of shown what life would of been like if he wasn't born, and Cliff would of been involved in a Presidential election and had a family.

Cliff appeared in the first reunion film JR Returns. He plans to selling Ewing Oil, with J.R Returning to town 5 years since his breakdown hoping to rise in power. In the end Cliff sells to Bobby and reunites with his daughter Pamela Rebecca, as he feels his family are more important than trying to get one over on J.R.

Cliff returned in the 2012 revival series which ignores the reunion films. Over the next 20 years since taking control of Ewing Oil, Cliff rose in power and became a powerful man. He founded Barnes Global, and sold off Ewing Oil. Six-years prior to the Dallas 2012 series, Cliff had left Dallas and went into a casino business. He sent his daughter Pamela Rebecca Barnes to hook up with his adoptive nephew Christopher and become a mole in the Ewing household. The Ewings where unaware she was Cliff's daughter as she took under a new identity.

Cliff returned to Dallas when he found out Bobby Ewing was planning on selling Southfolk and visited him to make a deal and ask to buy it of him. However Bobby didn't want to sell up to Cliff as he planned on selling Southfolk to a conservation in his mother Miss Ellie's memory. While at the house, Cliff crossed paths with old nemesis J.R. who came back to stay with Bobby. After some exchanges Cliff left. At the end of the first series it was revealed that Rebecca was Cliff's daughter, and after losing Christopher when he discovered she caused him to separate from his girlfriend, Cliff told Rebecca to continue keeping an eye on the Ewings.

During the second season, he meets J.R's son John Ross who warns Cliff that J.R and Cliff's adoptive son Frank are plotting to set Rebecca up for the murder of her boyfriend. Cliff has Frank's fingerprints planted on the gun which causes him to be arrested. Cliff visits Frank and tells him to do the honorable thing and kill himself and his family will be looked after, which Frank does. After J.R's death, Cliff shows up at his funeral to pay his disrespects and causes a scene. He then pairs up with the Ewings other enemy Harris Ryland in order to take down the Ewings and steal their business Ewing Energies.

He gives the orders to blow up the rig, despite his daughter being present and carrying unborn twins. Cliff is then set up for the murder of J.R by the Ewings and Pamela, who lure him to Mexico and plant a gun in his car. Cliff is arrested by the Mexican police and taken into custody. Bobby visits him and offers to help Cliff if he admits to having the rig blown up, but Cliff refuses as he will never accept help from the Ewings. He asks Bobby who killed J.R, but Bobby refuses to answer. Cliff later calls upon Elena Ramos (the ex-friend of Christopher and John Ross) revealing that J.R had given her father land with hardly any oil, which caused his death. He then makes her a proxy at Barnes Global (now Ewing Global) and asks for her to make the Ewings pay. JR may be dead, but the feud is still on. Cliff maybe in jail, but he has Elena as his inside person to spy on the Ewings and take back what belongs to him. 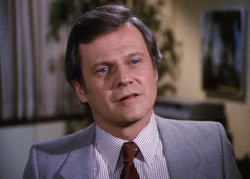 Cliff in the original Dallas series 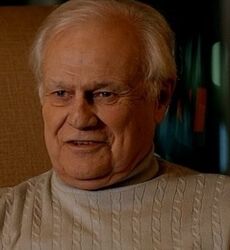 Cliff in 2012
Add a photo to this gallery
Retrieved from "https://villains.fandom.com/wiki/Cliff_Barnes?oldid=3464319"
Community content is available under CC-BY-SA unless otherwise noted.