Investigating for the Lords of Alchemy.

To create a new "Eden" with himself as "Adam" and Canna as "Eve" to be seen by those he loves.

Magical Scientist
Clifford "Cliff" Higgins is the main antagonist of Ninja Gaiden 3. He is introduced as a special scientist working for the Japanese Self Defense Forces. However, at about halfway through the game, it is revealed that he is actually one of the game's antagonists who secretly works for the Lords of Alchemy.

Cliff decided to brought by the government. He provides back on the Yunagi, Cliff reveals that the LOA have their secret headquarters in Antartica. When Mizuki is about to leave, he stops her and insists on letting him go, which she agrees.

Cliff transforms into a four-armed creature and fights Ryu. During the battle, Ryu shoots an arrow at Cliff, but he vaporizes the bow, asking the ninja "who gave him the bow." Cliff eventually gets the upper hand and tries to kill both Ryu and Mizuki, but they are saved by Theodore, who had somehow survived his battle with Ryu and regained his mind. Theodore mortally stabs Cliff and kills him.

Cliff tells them he did what he did because he wanted to be seen by those he loved, and claims that "all things come to an end" before vanishing, leaving his red glasses behind.

Cliff showed his more cruel and calculating personality. He needed for the Goddess. 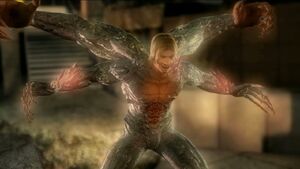 Cliff Higgins' "evolved" form.
Add a photo to this gallery

Retrieved from "https://villains.fandom.com/wiki/Cliff_Higgins?oldid=3546513"
Community content is available under CC-BY-SA unless otherwise noted.