Cliff Hudson is one of the bosses or psychopaths featured in the 2006 video game Dead Rising. He is also an optional boss in the main mode 72 Hours, who can be found on the 2nd day at 8 am in North Plaza in the Crislip's Home Saloon Hardware Store in the scoop The Hatchet Man. He is a former war veteran from the Viet Cong, whose granddaughter was devoured by zombies, which made him having flashbacks of the war, and additionally seeing other people eaten by zombies made him insane so he kidnapped three survivors: Rich Atkins, Barbara Patterson and Josh Manning and imprisoned them in an empty store, believing that he was in the war and the survivors were members of the Viet Cong, which he was using as prisoners of war.

He was voiced by Steve Blum, who also voiced Roger Hall in the same game.

At 8 a.m. on September 20, Otis informs Frank that he has noticed Cliff walking around the Crislip's Home Saloon Hardware Store carrying a bloodied machete with him. Otis noted that Cliff knows where the security cameras are and is able to sneak past them unnoticed.

Frank West heads to the store that has been designated as the former veteran's whereabouts to investigate the matter. Inside the store, Frank can see a lot of blood spilled throughout the store and many headless zombie bodies tied by the legs to the ceiling. Frank is terrified to see such a massacre that he does not notice Cliff standing right behind him. Cliff yells at him to know what his rank is, scaring Frank into being unable to answer him. Cliff believes Frank is a member of the Viet Cong because he has not answered his question. An angry Cliff called him a communist and waved his machete at him. Frank dodges the attack and Cliff runs into the shopping aisles, starting to mock Frank, telling him that sooner or later he will reveal the necessary information to him before he kills him.

After the fight, the defeated Cliff falls to the floor. Frank, thinking he is dead slowly departs, but Cliff, apparently regaining his senses, calls Frank and asks him to come over. Cliff pulls a wallet with his family photo out of his pocket and tells him that his granddaughter has been torn apart by zombies and it has driven him insane. Cliff adds that everything he survived in the war returned, so the war never ended for him. Frank is very touched by Cliff's story and closes his eyes in empathy as a sign of respect when Cliff dies. In his wallet, Frank finds the key to an empty store in which Cliff locked the three survivors, allowing Frank to save them.

Unlike almost every other psychopath in the game, Cliff is more in line with an anti-villain, as his mental state and tragic backstory reveal. The fact that he did not immediately kill any captured survivors does indicate some level of control, though more than likely it was due to Cliff's mental state somehow clouding his judgement through the haze of Vietnam.

In the Wii version Dead Rising: Chop Till You Drop, Cliff appears as a special zombie variant.

Photo of Cliff in Frank's Notebook. 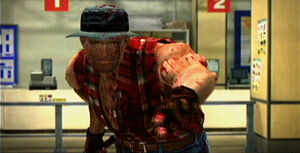 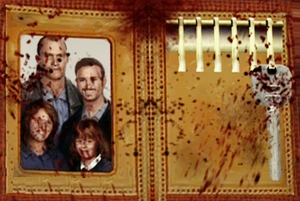 Photo of Cliff and his family in his wallet. 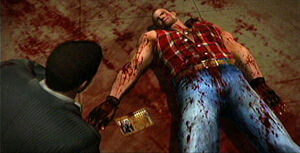 Cliff on the verge of dying. 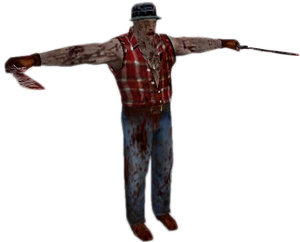 Zombie Cliff in Dead Rising: Chop Till You Drop.