Singing rhymes for his baby

Betray the Bridges Company as revenge for not taking care of his family (succeeded).

Kill Sam Porter-Bridges and reclaim his baby(abandoned).
Make peace and make amends with his son Sam (succeeded).
Save his wife and his Bridge Baby by any means (partially succeeded).
Destroy the Bridge Company(failed).

Clifford "Cliff" Unger, also Captain Unger, is the secondary antagonist of the 2019 open-world action sci-fi video game by Hideo Kojima, Death Stranding. He is a powerful Beached Thing who retains his living sanity, personality, and intelligence, who has the ability to pull Sam Bridges into his own Beach to attack him with other BTs who resemble skeletal soldiers.

He is also Sam's father and second enemy, and, he is a military key figure of the Bridges Company, who lost his wife BB and his own bridge baby whose also named BB, hoping to save them both from cancer and mostly death as he is ulitizting his superhuman capability of creating and controlling armies of skeletal, glowing-eyed soldiers through a series of black cables emerging from tar around the world, with them following him and his orders without hesitation.

He is mainly seeking not only to stop Sam from his cargo missions but also to save his wife and his baby doing so in any kinds of actions no matter violent or destructive, and, if it means to kill Sam, he would do so.

He was portrayed and voiced by Mads Mikkelsen, who also portrayed Le Chiffre in Casino Royal, Captain Rochefort in The Three Musketeers, Kaecilius in Doctor Strange, and Hannibal Lecter in the TV series Hannibal.

Nothing is truly known about Cliff's origins nor his early life except the fact that in some point in his life, he became an integral military figure of the Bridges Company for which Sam, the game's primary character, is working for.

He is making his debut appearance when Sam falls into a Timefall, and, the Bridge Baby connected to him is seeing his father, Cliff himself, as he is promising him and his future deceased wife BB (who is named BB after the Bridge Baby) that he would stay with him until the end of time and will always care for him, singing him a rhyme song even, in order to make him sleep.

He is later returns in another vision of the baby, as he is once again promising to him he will never let him go even though he is getting into an intense conflict with the Bridges' security branch but not before meeting a soldier on which he used to command, before escaping.

In his escape, he is becoming injured by Sam, driving him to lose the baby to Sam, who runs into a destructive battlefield which is designed and appeared to be like a battlefield from World War II, in which Cliff unleashes his capability of creating skeletal, glowing-eyed soldiers through a series of black cables emerging from tar around the world, making them all to look like German WWII soldiers.

After a long ten-minute battle between the two across the entire battlefield, in which Sam manages killing and defeating the entire armies of his soldiers, Sam finally kills Unger with his rifle, causing his plans to be failed.

Cliff Unger has an extremely complex personality in contrast to other villains, mostly in video games. He is appearing to be an extremely kind heart, heartful, good and everyman individual who would do anything for his child either his wife.

He is seeing the Bridges Company he is working for, mainly Bridget, as a company of liars, as they were promising to him that his family would be safe once they would complete their treatments, stating they are both unable to get out from their treatments until their illnesses are healed ,therefore Cliff is shown to be a normal family man, promising he would do anything for his child or his wife to make sure they would be alive and stay with him, even singing rhymes and songs to his baby, even the fact he is a Bridge Baby of the company.

Despite this, his villainy sides is shown across the game more and more as the hero Sam passes throughout the missions and the game's main story, causing Cliff to be shown toward the players as an extremely dark, cold, ruthless, destructive, violent, and above all cunning and sophisticated individual, yet, he is mostly an anti-hero or an anti-villain rather than only a simple antagonist.

These patterns of behavior are appearing from the reason his intentions, even though they appear to be destructive or not, are always revolving around his family and their fates. He is not an arrogant individual like the game's main antagonist or a rich businessman like the company he works for, but Cliff is mostly an everyman.

Cliff Unger is possessing various abilities and skills, such as; 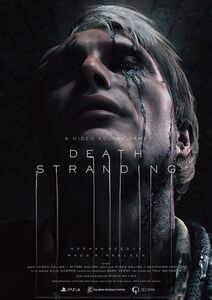 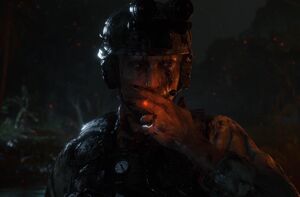 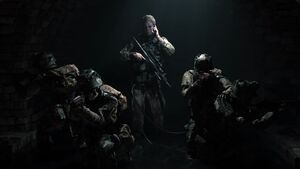 Cliff with his men. 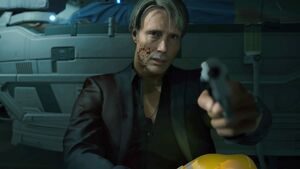 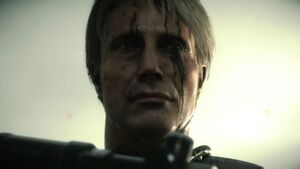 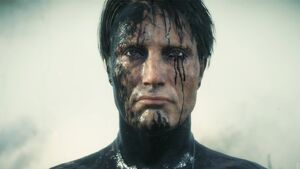 Retrieved from "https://villains.fandom.com/wiki/Cliff_Unger?oldid=4108681"
Community content is available under CC-BY-SA unless otherwise noted.