Proficiency in both armed and unarmed combat

Helping Avon bring humanity to extinction and Kill the Protagonists (all failed).

Attempting to kill the Protagonists.

The Cliffford Mercenaries are the main group of antagonists in Grand Theft Auto DLC The Doomsday Heist.

They are terroristic mercenaries that is led by Cliffford and Avon Hertz. They made their first appearances in the mission The Bogdan Problem.

According to Bogdan the Cliffford Mercenaries were cyborg clones created by the Cliffford computer when it gains control over the Russian Submarine, a military base and a lab.

All of the Mercenaries have the same exact appearances and have the same exact voices. The Clones are regular infantrymen wearing body armor and Juggernauts armed with miniguns and with sophisticated cloaking devices that render them invisible to the naked eye.

They classified as terrorists judging by their behavior, tactics, and "ideology". 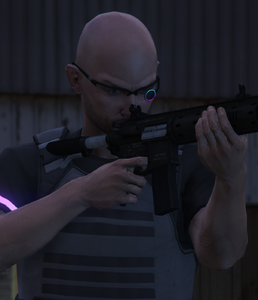 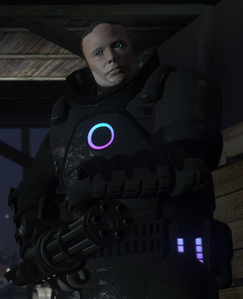 Juggernauts
Add a photo to this gallery

Retrieved from "https://villains.fandom.com/wiki/Cliffford_Mercenaries?oldid=2954530"
Community content is available under CC-BY-SA unless otherwise noted.