Soldier in the British Army

(Before Infection): Weapon Usage
Knowledge and Skills in the Military Field
Strength

(After becoming an Infected): The powers of a typical Infected

Swaggering around and bullying people

Clifton is the among Major Henry West's soldiers and an antagonist in 28 Days Later.

He was portrayed by Luke Mably.

Clifton was a private in the British Army and abandoned his post outside Manchester to rebuild.

He is among the soldiers who prepare to rape Hannah and Selena under West's order. Clifton doesn't hardly talk throughout the movie. This making traits of his personality hard to discern.

Clifton was among the many soldiers led by Major Henry West sent to defend the city of Manchester from The Infected when the Rage Virus broke out in Great Britain. But the Infected eventually overran the barricade, killing or infecting all the soldiers except Clifton and nine others. Clifton and the other soldiers abandoned their post at the blockade and fled to the Worsley House in the woods where they fended off attacks from Infected with military traps and firepower.

On day 23 of the outbreak, Major Henry West promised his soldiers that any female survivors they rescued would be forced into sexual slavery to rebuild and repopulate the destroyed United Kingdom. Clifton first appears where he is on top of Frank's taxi (for unknown reasons) and another soldier is driving it in circles. He falls off the car and someone can be heard saying "run him over".

He then appears later that night singing with the other soldiers at the dinner table and cheering when West arrived. Henry then removed Clifton's hat, which he quickly put back on (showing his fondness of it). Later he and the other soldiers fight off a swarm of Infected that attack the house; Clifton blasting them with a shotgun. He later hands West Selena's machete after her and Farrell's outburst. When Jim finds out that Henry West promised his soldiers that any female survivors they found would be forced into sexual slavery, he attempts to get Selena and Hannah to escape the Worsley House. Which leads to him being knocked unconscious by an ambushing Bedford. This leads to a standoff between Sargent Farrell, one of West's soldiers who disagreed with his plan of repopulation and the other soldiers. As Farrell is cornered, Clifton runs up to him and disarms him and proceeds to tackle and beat up Farrell along with West's other men. Clifton next appears when West explains his plan of repopulation and assists Bedford in undressing Selena while Hannah watches in horror. Selena then runs up to Clifton and roughly kisses him before then saying that the soldiers should leave the room so the girls can get changed. He then applies and the soldiers leave. Selena did this so she could feed Hannah sleeping pills to make the rape less traumatic for her. Clifton catches her in the act and barges into the room and assaults her for it. He then restrains Selena while the Barricade alarm sounds (by Jim). He appears later that night in the living room of the house. Where Hannah (still under the effect of the sleeping pills) begins making prophetic claims about Davis and Henry (who went searching for Jim at the blockade)'s deaths and that Jones, Mitchell, and Clifton were next. Clifton is then ambushed through the window by Mailer, a soldier who was infected with the Rage Virus two days before the Manchester Three arrived. Mailer vomits 2 mouthfuls of blood onto Clifton's bare face, infecting him. After the others flee the room, Clifton emerges from the floor as an Infected. He then aids Mailer in his rampage through the Worsley House. He appears when Mailer is about to be killed in the eatery of the house. As Bedford is about to shoot Mailer (letting his guard down while taunting Mailer), Clifton ambushes Bedford from the right. He and Mailer then proceed to drag the flailing, defenseless Bedford onto the table and snap his neck and maul him to death (while Jones hides and cries in horror). He later appears after Jim murders Jones trying to escape the Worsley House. He and Mailer pursue Jim, but give up after he hides in a switching wall. He then appears when Hannah hides behind the bathroom mirror. Clifton gets briefly distracted and confused by his own reflection before running back into the house to hunt down more soldiers. He appears one final time when he breaks into the house's nursery, where a cowering Bell is hiding. They break into the room as Jim escapes through the window. He and Mailer proceed to viciously maul Private Bell to death. He presumably leaves the house while Mailer stuck around to murder Major Henry West.

In a deleted scene, as West is exploring the ruins of the cellar, he shoots and kills the Infected Clifton.

Clifton had no qualms over raping two innocent women like most of Major Henry West's other soldiers. He is mostly silent throughout the movie, making further notes of his personality unknown. He mostly kept to himself and wasn't as vicious as Mitchell or most of the other soldiers. After he became an Infected by Mailer, Clifton took on the traits of a regular victim of the Rage Virus. Being full of mindless hatred and rage for any uninfected individual. And his only desire being to kill or infect others, including caring more about this than self-preservation and nourishment. He did not appear to be as smart as Mailer. 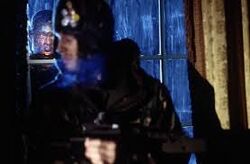 Clifton's last moments before he gets Infected by Mailer. 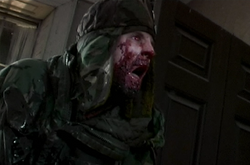 Clifton Infected with the Rage Virus
Add a photo to this gallery
Retrieved from "https://villains.fandom.com/wiki/Clifton?oldid=2359985"
Community content is available under CC-BY-SA unless otherwise noted.