He was voiced by Andy Nyman, who previously portrayed The Tumor in Kick-Ass 2.

Clive is a small, 80s-looking white robot with red eyes, a crudely drawn smile and a blue antenna. He also appears to have a rather toy-like look to him.

He was originally a character in the show "Evil Bratt" (which Balthazar starred in) and appeared as the latter's robot sidekick and minion. After the show got cancelled, Bratt made a replica of Clive who would be his minion and partner in crime.

He assisted Bratt in several crimes including stealing the diamond and kidnapping Gru and Lucy's daughters from Dru's mansion. He mostly appears as his get-away driver. He was most likely crushed and killed after Balthazar's robot was destroyed by Dru since he isn't seen later when Bratt escapes from the robot safely or for the remainder of the movie. Balthazar even complained to Gru, "You ruined everything!" as in everything Balthazar had, which may include Clive and this would confirm Clive is dead. If Clive didn't die he may have been knocked out or seriously injured when the robot crashed or escaped off-screen while Bratt got captured. 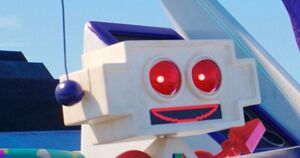 Retrieved from "https://villains.fandom.com/wiki/Clive_(Despicable_Me)?oldid=4124320"
Community content is available under CC-BY-SA unless otherwise noted.