Clive Dove, also known as Klaus in Japan and under the alias of Future Luke, is the main antagonist of Professor Layton and the Unwound Future. He forms an alliance with scientist Dimitri Allen and hatches a plot to kidnap Prime Minister Bill Hawks and several scientists all for the sake of creating a Mobile Fortress for revenge against London (unbeknownst to Dimitri, who wanted to construct a time machine). He is the true leader of the Family.

10 years prior to the story, Clive lived peacefully with his parents. However, his life changed forever when they were killed in an explosion from a nearby laboratory (which also took the life of Claire). Clive tried to go back into the building but a young Hershel Layton , hearing news of the incident, stopped him, thus saving his life in the process.

Sometime after the incident, Clive was adopted by a wealthy woman named Constance Dove, whom he grew very close to, until her death five years later.

Upon his guardian's passing, Clive inherited a sizable amount of money and used it to search for the ones responsible for destroying his life. He took a job as a local newspaper boy to search for information regarding the explosion and found the names of two men: Bill Hawks and Dimitri Allen, who worked on a failed time machine experiment.

Clive ordered Professor Layton to an underground replica of London, which was believed to be London ten years in the future. There he acted as an older version of Luke Triton, the Professor's apprentice.

When it was revealed that he wanted to destroy London with a giant war robot as revenge on the government Layton stopped him with the help of Luke, Flora, Don Paolo and Claire and he was arrested. Before he was brought to prison he told Layton that he will try to atone for his crimes.

In the manga series Professor Layton and the Cheerful Mystery, he appears in the second, the third and the fourth book. However, due to his identity already being revealed in the games, his true nature isn't uncovered in the manga, maintaining his role as an anti hero.

As a child, Clive loved his parents very much, so that by their death he was influenced so much of anger and grief, that he became obsessed with only revenge. He lived out this obsessive though of revenge in extreme ways, making him seemingly forget all ethics and morals. However, by the action of Professor Layton and Claire, he saw, after he had been stopped, how wrong his purposes were.

Clive is intelligent and able to act manipulatively. He is able to manipulate everything from behind the scenes, while posing as a hero. His almost indestructible Mobile Fortress is able to cause havoc on a very large scale, destroying rows of houses with only one of it's feet and being able to shoot bombings all over London. 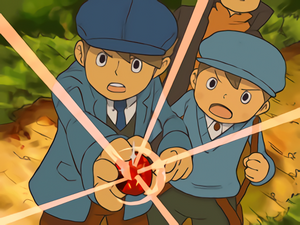 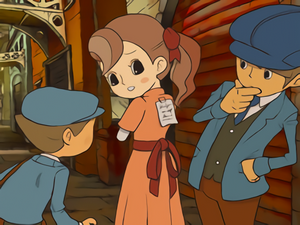 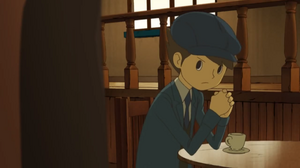 Retrieved from "https://villains.fandom.com/wiki/Clive_Dove?oldid=3888549"
Community content is available under CC-BY-SA unless otherwise noted.