Mutated Criminal
Clive Yorkin is a minor antagonist from DC Comics, only fighting against The Flash. A psychopathic sadist, Clive Yorkin is able to drain the energy from any living thing he wishes. He is also able to detect and absorb emotions, with negative emotions boosting his powers and positive feelings weakening him.

Born in Missouri, Yorkin is a well-known criminal in his city, with a record including robbery, arson, and murder. After being caught and jailed for the rest of his days, a scientist in the prison, Doctor Nephron experimented on the man to force his mind to link crime and pain. However, since the pleasure and pain centers in his mind were reversed from the start, the test hurt him both physically and mentally. The Flash attempted to stop Nephron's work, but failed too, resulting in Yorkin becoming more even more aggressive and gaining superpowers. He then escaped from the prison, with the death of Iris West originally blamed on him instead of the real culprit, Professor Zoom.

Yorkin continued to terrorize the city, savagely murdering all who were unlucky enough to bump into the boosted brute, and being able to drain emotions to escape his capture. However, he was eventually found by a psychic, and The Flash defeated the fiend by trapping him in a sinkhole. He was then returned to his prison cell, destined once more to rot in there for the rest of his days.

Clike Yorkin appears in the 2014 TV show The Flash, played by Matthew Kevin Anderson. A meta-human caused by the Flashpoint, he can decay anything he touches. He uses this abillity to get revenge on those who harmed him. 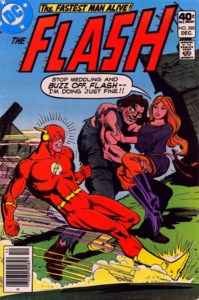