The Mysterious Figure
The Clone

Captain of the Normandy (briefly)

Pretending to be Shepard.

The Clone is one of the two main antagonists of the Citadel DLC in Mass Effect 3, along with Maya Brooks.

The Clone is a genetic duplicate of Commander Shepard created by Cerberus during Project Lazarus. After escaping confinement, it hired a mercenary corporation and planned to kill the Commander and steal their identity.

The Clone shares its two voice actors with Shepard's dependent on gender, Mark Meer as male and Jennifer Hale as female.

The Clone was created by Cerberus to provide spare organs and limbs for the real Commander Shepard, who was being revived by the Lazarus Project. At some point in its development, it was stored in the Minuteman Station, skinless and under life support. Once Cerberus obtained Shepard's Spectre dossier, the Illusive Man deprioritized the Clone project and allowed project overseer Miranda Lawson to continue using it for testing.

Some time in 2184, the order was given for the Clone to be terminated. However, Agent Rasa had other ideas and decided to liberate it from Cerberus hands. A subsequent shootout at Lazarus Research Station resulted in Rasa severing ties with Cerberus and escaping with the Clone's tank. One of its known hiding places was Rasa's old stomping grounds on an asteroid orbiting Themis.

The Clone remained in storage until six months before the Reaper invasion in 2186, when it was awoken by Rasa (then calling herself Maya Brooks). Over the intervening months during Shepard's incarceration, the Clone learned "how to be human" using neural implants, and with Brooks' help, devised a plan to kill and assume the role of the Commander in order to carry out a pro-human agenda. To accomplish this, the Clone hired a private military corporation called CAT6 to eliminate Shepard and his/her close allies, since the Clone lacked the original's memories and was unable to perfectly impersonate the Commander.

Some time after Cerberus' assassination attempt on the Citadel, the Clone sets its plan into motion while Commander Shepard is ordered by Admiral Steven Hackett, head of the Alliance Navy, to go on shore leave. It purchases various firearms and equipment for its CAT6 troops via arms dealer Elijah Khan, hacks databases to steal Shepard's classified files, and sets a trap at a popular sushi restaurant in the Silversun Strip with the intent of obtaining Shepard's Spectre code.

The Clone successfully obtains the Spectre code, but the original manages to escape being killed. To compensate, it uses Brooks to tie up loose ends by having Khan executed and then luring Shepard and their team into another trap at the Citadel Archives by intentionally using the Spectre code to get itself and its mercenaries in.

Donning CAT6 armor and pretending to hold Brooks hostage during a clash between its troops and Shepard's team, the Clone finally reveals itself and shares part of its motivations and life story. It puts up a signal blocker to intercept any transmissions, and manages to obtain the SSV Normandy SR-2's command codes in the process. Impersonating the real Shepard and telling Specialist Samantha Traynor to get the Normandy prepped for emergency launch, the Clone orders its troops to execute Shepard and the team and moves deeper into the Archives.

Shepard and team thwart the kill order, but the Clone's plan to have them all sealed within the Archives' iridium vaults ultimately becomes successful. Before trapping Shepard and their squad in one of the vaults, the Clone and Brooks now reveal the full extent of their plan. The Clone makes a show of pointing out that handprints can't be cloned, and promptly updates the Commander's records with the Clone's own biometrics before setting out to be the captain of the Normandy.

The trap does not last for long, however, and Shepard and their team soon resume the chase. Meanwhile, the Clone has been busy taking over the ship: it fires Traynor for "fraternization"/"conduct unbecoming", and disposes of Shepard's cabin accessories in a big bin. Upon learning that the real Shepard has boarded the ship, it orders its troops to slow the Commander down, and on Brooks' suggestion, heads down the armory to prepare for a final showdown.

The Clone, now clad in N7 armor, fights the real Shepard in a pitched battle in the shuttle bay, insulting the Spectre and their squad while the ship is attempting to fly out of the Citadel. Upon learning that the Normandy can't jump to FTL due to Cortez and Joker's interference, the Clone dispatches the UT-47A Kodiak to deal with the pilots and continues the assault on the real Shepard's team, not bothering to have the hangar bay door closed.

Shepard eventually tackles the Clone, causing them to tumble down the open boarding ramp and nearly fall off the edge. As they hang on for their lives, the Clone demands to know what made the Commander more special. As Shepard's teammates, the "emotional baggage" the Clone was quick to dismiss, help the Commander up, the Clone looks up to Brooks and watches her turn her back.

The Commander is then faced with either helping the Clone or kicking it off the ship to its death. If Shepard attempts the former, the Clone will refuse the original's aid and purposely fall to its death, spitefully asking what it can live for before letting go.

Unlike the real Shepard, the Clone had a set personality; that of a petty and single-minded tyrant. It believed the Illusive Man abandoned it when he had what he wanted (the real Shepard) and became driven by an obsessive desire to become Shepard itself. This motivated it to try and kill the real Shepard and every single one of his/her teammates, to which it referred to as the 'cult of Shepard'.

Being a creation of Cerberus, the Clone was intensely xenophobic and accused Shepard of forgetting about humanity, due to the fact that he/she had saved more alien lives than he/she had human. This clearly indicates that had its plan succeeded, the Clone would have prioritized humanity before every other race, despite showing a complete disregard for the lives of others regardless of their race. The Clone was a ruthless soldier who saw emotions as a weakness and believed the real Shepard was held back by his/her "doubts" and "failures", and considered Shepard's teammates emotional baggage that did nothing but hold him/her back. It was extremely arrogant and had a very high opinion of itself, believing itself to be "the real thing perfected" and "the lone wolf" the Commander was "always meant to be", even though Shepard's teammates considered it to be nothing more than a "pale/cheap imitation". Shepard him/herself later declared that the Clone was just "one more mercenary thug".

The Clone was shown to be callous, not caring at all about collateral damage and willing to kill anything that got in its way. It also showed next to no concern for its teammates, threatening to fire them if they didn't do their jobs. Furthermore, it didn't seem to have much faith in its team, as shown when it told them to slow Shepard down as opposed to killing him/her. Indeed, one of the lead mercenaries remarked that it saw them as nothing but cannon fodder.

Despite its callousness, the Clone did, however, seem to be fond of Agent Brooks, describing her as its equivalent of Miranda Lawson. But the fact that she made no effort to save the Clone suggests that it treated her a similar way to how it treated the others, just not as obviously. Despite all this, the Clone claimed that its team was just as good as Shepard's, implying that it was also a hypocrite and more than a bit jealous that the real Shepard had such a good team; Shepard him/herself declared that the Clone did not in fact have a team, but rather "minions". Its hypocrisy was further shown when it called Shepard a "figurehead" to which he/she replied "Then how come you want to be me so badly?". Moreover, Shepard called out the Clone for its poor impersonation of him/her, declaring that his/her fan Conrad Verner did a better job at being him/her than the Clone did.

While it was usually calm and kept its emotions under control, the Clone would occasionally explode in childish fits of anger. Perhaps the most notable example of this is when Shepard informed the Clone that it didn't have what it took to be him/her, causing it to scream 'I'm Shepard! You hear me, asshole/bitch?! I'm Shepard!', to which Shepard replied with a solemn "No, you're not.". Its obsession with becoming Shepard was so great, in fact, that when it realized it was beaten, it spitefully refused Paragon-Shepard's offer to be saved, believing it had no reason to live.

Brooks in league with the Clone

Infiltrator Clone and Brooks in the Normandy 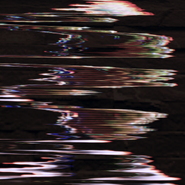 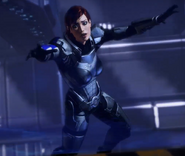