Use the King of Fighters tournament to overthrow NESTS.

Rule the world (both failed).

A version of Zero known as Clone Zero is a high-ranking operative of NESTS and the main antagonist of The King of Fighters 2000.

During the events of King of Fighters '99, he watched the performance of the Kyo clones created by his subordinate Krizalid while analyzing K'. After Krizalid's defeat, the Kyo clones were terminated and Zero kills Krizalid by throwing a boulder on him after stealing the clone transmission data in the process.

In the following game, Zero sets his plan Project '00 into motion impersonating the murdered Ling, a friend of Heidern. Using his Ling persona, Zero orders Heidern to guide the winning team to the factory lift and activate the Zero Cannon's generator. He then has the military personnel hold Heidern prisoner admitting he wants to capture K', Maxima and search NESTS's base.

Zero later reveals himself to the winning team. He also demonstrates the Zero Cannon's power by blowing up part of Southtown. As the fights the final team, the generator begins to siphon their energy for the cannon. Even after being beaten, Zero moves to activate the cannon, but the generator fails. As Heidern kills the Ling clone, Zero is confronted by Diana and Foxy for his skullduggery. As punishment, Kula uses the Zero Cannon to kill him.

In the Japanese version of the Ikari Warriors ending, Zero survives long enough to share crucial information about Whip's past before being shot dead by her gun. In the overseas versions, he succumbs to his injuries instead after sharing the information without having Whip to shoot him down.

In contrast to his original, this Zero is purely evil, while sharing the original's dislike for traitors, he ironically and hypocritically wishes to betray anyone for his own ideals. He can also mask his personality and copy others. 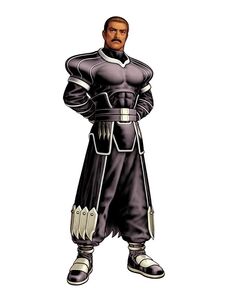 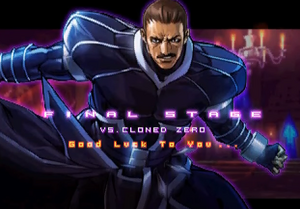