Villains Wiki
Register
Don't have an account?
Sign In
Advertisement
in: Mature, God Of War Villains, Female,
and 18 more
English

Goddess of the Past

Youngest Sister of the Sisters of Fate

Greek Goddess of the past

One of the Sisters of Fate

Creating the Treads of Fate.

Prevent Kratos from killing the Sisters of Fate and Zeus(Failed)

Clotho is the secondary antagonist in the video game; God of War II. She is the youngest of the Sisters of Fate and is also known as the Goddess of the Past.

She attempted to warn Kratos not to proceed onward, but Kratos ignored her warning completely. After Kratos killed all the creatures such as the Cyclops, minotaurs and so forth, he eventually entered the Loom Chamber and reaches the lower third of the Clotho. Kratos has to climb up three floor in order to reach Clotho's head.

Kratos takes her body out in various stages while she attempted to hold him off with her multiple arms. When he reaches the top third, he brings forth a large, swinging, pendulum and he uses it by, impaling the Pendulum right into her skull, killing her.

Clotho is the largest of the Sisters of Fate. She has disgusting scaly blue flabby skin, and long white hair, but most notable things about her is her mulitple flabby arms, and multiple breasts.

Being a Goddess, Clotho is immortal, meaning that she's immune by diseases, and that she can't die via old age. She pocesses superhuman strength, and endurance. Clotho also has multiple arms that she uses in combat. She also is the one who creates the Treads of Fate. It's clearly unknown if she has the power to control time as in the battle she only uses her arms even when close to death. 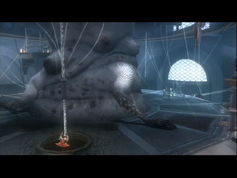 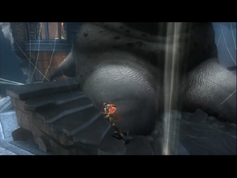 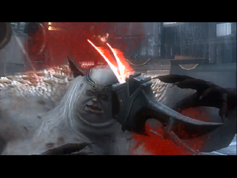