The Dark Cloud (in Japanese)

Personification of the Void

Return everything to the Void.

The Cloud of Darkness (in Japanese: 暗闇の雲, Kurayami no Kumo, lit. "The Dark Cloud") is one of the most feared and powerful villains in the Final Fantasy series, appearing as the overarching antagonist and final boss of Final Fantasy III. She appears to be a semi-naked, humanoid female with a heart-shaped red marking on its forehead, accompanied by sentient tentacles. Although she is the final boss, she does not appear in the game until the very end. The Cloud of Darkness refers to herself in the plural form, using "we" instead of "I." Dissidia Final Fantasy explains this as her two tentacles having minds of their own, and the humanoid body speaks for all three of them. In the Nintendo DS translation, however, it is more apparent that "we" refers to the idea that the Cloud of Darkness is a collective entity born of darkness.

In the NES version, the Cloud of Darkness's snakelike tentacles were simply for decoration. In the Nintendo DS version, the tentacles' numbers were reduced to two and act as enemies. The one to the right of the Cloud of Darkness has abilities such as Haste and Esuna, and is only weak to magic, while the one to the left uses Lightning whenever possible, and is vulnerable to attacks.

She was voiced by Laura Bailey, who is also known for voicing Lust.

The Cloud of Darkness's personality is not really explored in Final Fantasy III, as she is more of a sentient disaster rather than a character, though in Dissidia Final Fantasy, she is given more depth. The Cloud of Darkness is very cruel, arrogant, and belittling towards others, as she has no care for human life, though she is fascinated by living things' attempt to live in spite of knowing they would eventually die.

In league with Exdeath, Kefka, and Kuja, the Cloud of Darkness also desires to destroy everything. It is also implied that the Cloud of Darkness thinks that the manikins are abominations, and for that reason, she aided Laguna Loire in sealing the door to the rift through which they had come (though in the process, she also set it up perfectly so that he, Kain Highwind, Tifa Lockhart, Yuna, Vaan, and Claire "Lightning" Farron would be overwhelmed by said manikins and subsequently killed by them, as warriors killed by manikins rather than by other warriors would not be revived by Shinryu for the following cycle of conflict).

In Final Fantasy III, she​ appears as the main antagonist and final boss, though she doesn't appear until that point. She was created when the wizard Xande stopped time in his quest for immortality and sealed the light of the Water and Earth Crystals, shifting the balance between light and dark in favor of the latter. The imbalance gave birth to the Cloud of Darkness, a manifestation of the excess darkness whose sole purpose was to destroy both the worlds of light and darkness by having the Void consume them. From here, she commanded Xande to carry out her scheme.

She first appears after Luneth, Arc, Refia, and Ingus defeat Xande. She then kills them. However, they are brought back to life to defeat her. Though it is too strong, the Warriors of Dark, who had to save their own world from the light, sacrifice themselves so she can be defeated. Very little is known about her, however. It seems her only desire is to return everything to the Void, thus ceasing existence.

In Dissidia, she is a servant of Chaos, and the villain to the Onion Knight. She does not play too much of a role beyond that, but possesses the same goal as in the original game: to plunge the world into darkness.

In traditional Chinese culture, qì (also chi or ch'i) is an active principle forming part of any living thing. Qi is frequently translated as life energy, lifeforce, or energy flow. The literal translation of "qi" is breath, air, or gas. Not only human beings and animals were believed to have qi, as Zhuangzi indicated that wind is the qi of the Earth. The philosopher Mo Di recorded how some people performed a kind of prognostication by observing the qi (clouds) in the sky. In conclusion, the Cloud of Darkness is the bad energy of the planet, the dark wind, the largest evil life force that can exist on the planet, it is the planet's evil qi. 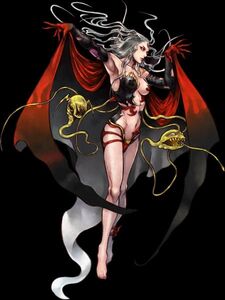 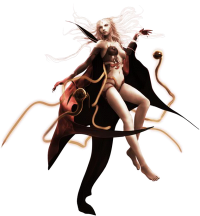