Kill Katniss Everdeen and Peeta Mellark in order to win the Hunger Games and to bring pride to her district (all failed).

Clove is a major antagonist in The Hunger Games franchise. Clove is the secondary antagonist of the first book The Hunger Games, and in the film adaptation of the same name. She is a 15-year-old tribute from District 2, along with her district partner Cato.

She was portrayed by Isabelle Fuhrman, who also portrayed Esther Coleman in Orphan.

Clove is the youngest and smallest of all Career tributes, but seems to be the most intelligent due to her methods. She has dark hair in ponytail or braids and is very arrogant, sadistic and strong. Her favorite weapon is knives, and she is known to never miss her target. Like Cato, Clove enjoys killing and deeply hates Katniss due her high score from training.

Clove comes from District 2 and has been training for her entire life to win the Hunger Games. At age 15, she obviously volunteers for the 74th Games and travels with her District partner, Cato, to the Capitol. During the opening ceremonies, she and Cato wear gold Roman themed armor, representing their district industry, military.

During the training, Clove flaunts all the time and shows her perfectly deadly skills with throwing knives. She soon joins other Career Tributes - Cato, Marvel and Glimmer - and spends much time with them, laughing at other tributes when they show weakness. At the end of training, she receives a training score of 10. This time, her deep hatred of Katniss starts too, as she ends up with 11.

In the arena, she allies with the other Careers to kill the rest of the tributes. In the Cornucopia bloodbath, she grabs several throwing knives and throws one of them into the District 9 male's back. When she sees Katniss running, Clove attempts to target her head, but Katniss manages to shield herself with her backpack and escape. Clove then kills the District 10 female and hits the District 7 female to the ground, allowing Marvel to finish her.

Later, Clove and the other Careers are joined by Peeta and, in the book, the District 3 male and the District 4 female as well. Together, they walk through the arena, killing other tributes. They chase Katniss up a tree and decide to wait under it until she comes down. However, she throws down a nest of tracker jackers, forcing them to flee.

Katniss and Rue then form an alliance and plan to destroy the supplies that the Careers have at the Cornucopia. Rue successfully lures them away and Katniss manages to blow all of the supplies up. When Cato discovers it, he gets angry and kills one of his allies, the District 3 male, while Clove tries to calm him down.

Cato and Clove show up again at the Feast. They make a plan, which involves Clove going in for their District 2 backpack with Cato covering her. However, when Clove sees Katniss going for her backpack, she can't resist and throws a knife at her, slicing Katniss above the eye. Katniss attempts to fire an arrow at her, but misses, and Clove jumps on her, pinning her down. Clove happily taunts Katniss about Peeta and Rue's death and then promises to give her a slow, painful death. Suddenly, they are interrupted by Thresh, who grabs Clove violently, as he heard her lying about how she and Cato had killed Rue. Clove starts shouting for Cato, but is killed by Thresh who hits her in the head with a rock. In the film, he slams her against the Cornucopia many times, killing her.

Gamemakers later use Clove's eyes for one of their Wolf Mutts (only in the book). 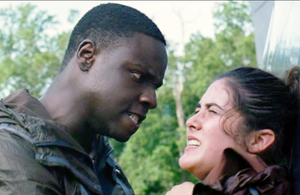 Thresh about to kill Clove.

Clove's unexpected defeat.
Add a photo to this gallery

Retrieved from "https://villains.fandom.com/wiki/Clove?oldid=3858991"
Community content is available under CC-BY-SA unless otherwise noted.