Member of the Clowns movement

Partaking in the Clowns' riots.

The Clown is a minor yet pivotal villain in in the 2019 psychological thriller film Joker, a DC Comics stand-alone film based on the character of the same name, which is the first installment of the newly launched DC Black film series, which is entirely separate from the DC Extended Universe.

He is an unnamed member of the Clowns movement who is responsible for murdering Thomas Wayne and Martha Wayne, thus starting Bruce Wayne's journey to become Batman.

Nothing is known about the murderous mugger other than that on the night of the riots, he saw Thomas Wayne, along with his wife and son leaving the movie theater and walking to an empty alley. He managed to block them in the exit and proceeded to kill both Thomas Wayne and Martha Wayne. Leaving Bruce as a orphan. It is unknown why he killed Thomas; however, given what he said before shooting him, he could be someone who used to work for him at some point or he found out what Thomas did to Joker and decided to take revenge for the movement's leader.

The Clown is very significant, because after he killed Thomas and Martha, their orphan Bruce will go on to become Batman. 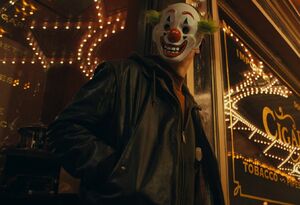 The clown spotting the Wayne family.
Add a photo to this gallery 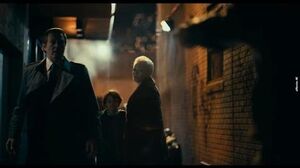 Retrieved from "https://villains.fandom.com/wiki/Clown_(Joker)?oldid=3486724"
Community content is available under CC-BY-SA unless otherwise noted.