Kill the Toaster (only in the nightmare).

Murder (only in the nightmare)

The Evil Clown, or also better known as the Firefighter Clown, is a dreamt minor villain in Disney's 1987 animated film The Brave Little Toaster. The only word that he says other than demented laughter is "Run".

He was voiced by the late Joe Ranft.

His appearance is a demonic clown dressed as a firefighter with a wicked smile, and holding both a fork and a firehose.

The Evil Clown appears in Toaster's dream. He appears after the Master gets caught by the smoke and the entire room is starting to burn. He dares Toaster to run for his life, and Toaster begins to do what the Clown dares him to do on what's left of the kitchen counter. The Clown looks very amused at the situation, and lets out a blast of water that later becomes a huge wave of forks that he merely escapes from. He vanishes after shooting the hose, but is heard laughing in the bathroom with Toaster hanging over a bathtub filled with water and his cord plugged into the Circuit losing his grip. As Toaster plunges down, he and his friends get awoken by a loud and boisterous thunderclap, bringing him out of his nightmare. 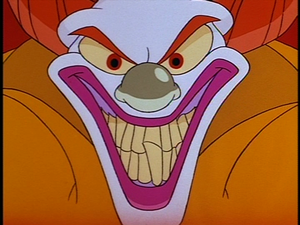 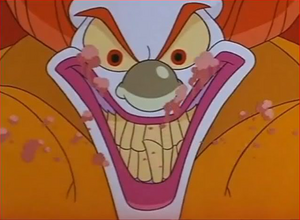 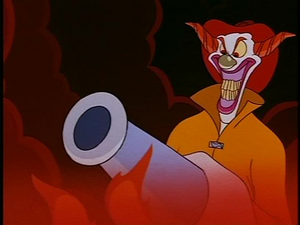