Clown Infected are Uncommon Infected featured in Left 4 Dead 2. They are seen in the Dark Carnival Campaign.

Clown Infected were, as their name suggested, clowns that were either lovable or disturbing. However, once the Infection broke out, the clowns were among the victims. They live in the circus, now dubbed the "Dark Carnival", and when they spot a Survivor, they will charge, catching the attention of other Infected with their squeaky boots.

An agitated clown in attack mode will attract other Infected, including more clowns. If a clown leading a group of infected is killed from a distance, all infected following him will stop, swat at the air around the clown's corspes, and then attack the Survivors again.

Clown pants come in a variety of colors, including pink and blue, red and yellow, blue and white, and white and red. They also wear suspenders, a white t-shirt, as well as white and red clown make-up with dyed red hair. 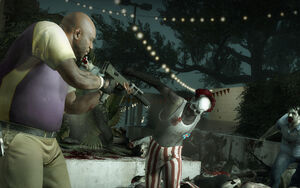 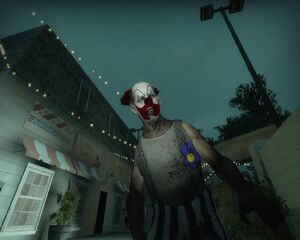 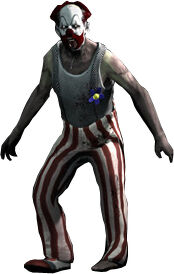 Retrieved from "https://villains.fandom.com/wiki/Clown_Infected?oldid=4149232"
Community content is available under CC-BY-SA unless otherwise noted.