"Have the last laugh" (most likely cause destruction and chaos, succeeded).

It is an unknown organization of ghouls known for their clown masks. The Clowns themselves are made up of hedonistic ghouls with no known purpose other than to "have the last laugh". After Hide had mentioned them, the C.C.G. has began an investigation into the organization.

The early days and foundation of the clowns remains unknown but they appear to have been publicly known for sometime now as they are relevant to the story and the public and CCG knows about them. The clowns are very secretive and Kishou Arima, Take Hirako, and Kousuke Houji are the only known Ghoul Investigators to have been in actual combat with one of the groups members.

Prior to the start of Tokyo Ghoul, the Clowns had influenced the story as one of the members had sent Yakumo Oomori to jail after revealing him to the CCG. This had lead to Yamori getting brutally tortured until he became a psychopath and eventually joined the Aogiri Tree and brutally killed dozens of humans and tortured untold number of ghouls. Over the course of the series, the Clowns are revealed to have been involved in major events throughout the entire series. Souta is revealed to have been responsible for the Steel Beam Incident where he dropped steel construction beams on Rize Kamishiro while she was trying to eat and devour Kaneki at a construction site. This led to Kaneki being taken by Akihiro Kanou and transforming him into an Artificial One-Eyed Ghoul. Itori is secretly involved in Kaneki's appearance at the Ghoul Restaurant and befriends Kaneki from behind the scenes. She gives Kaneki the information he needs about being a ghoul and Uta even gives Kaneki his mask although this is most likely done so the two of them would satisfy their sadistic goals. Finally, Nico begins to change the course of the series as he is involved in the abduction of Kaneki and his torture by Yamori and other members of Aogiri. Kaneki is eventually transformed into a ghoul and brutally injures Yamori. Nico then finds his dead corpse but seems to not care that Yamori is dead, only that a handsome man is dead. Following Kaneki's transformation Post-Aogiri, the Clowns continue to be active as the series progresses. During the hunt for Doctor Kanou, Nico and Itori are on the hunt for him as Aogiri, the CCG, and Kaneki's Group are all closing in on him and they need to find him as revelations of Kanou's experiments have been revealed. Kanou is found out and is taken by Aogiri in which he joins them and remains alive.The Clowns remain secretive for a while after that. At this point, Kaneki has had his memory erased and is under the identity of Haise Sasaki, unaware of his ghoul abilities.

After a timeskip of about three years, The Clowns have still remained active with their members still being alive. it is revealed that they have been hired by Big Madam to act as security guards for the upcoming Auction at Zeun Hall. The Clowns accept the deal and a small group of them are sent in. While at the Auction, Uta is talking with Roma and Ganbo on tragedies while the Auction is going on until the CCG burst right in. CCG Forces and soldiers burst into the building as auctioneers and guests are either getting gunned down or escaping. Uta, Roma, and Ganbo spring into action dn they manage to escape except of Ganbo who had his neck snapped by fellow investigator Takeomi Kuroiwa. Uta and Roma flee the scene with Aogiri while the rest of the building is secured by the CCG.

Following the Auction Raid, Uta goes to the :re cafe in Tokyo where he is meeting up with his old friends Yomo and Touka. He mtalks about what might happen to Kaneki and mentions a person simply referred to as "The Boss".

The Clowns leader is left unknown (if there even is one) but a person called "The Boss" is referred to by Uta. There are various different members of the organization all with unique abilities and powers but all have the same goal. Clowns are primarily ghouls who seek nothing more but to have what they call "the last laugh" i.e., to cause anarchy and chaos. Many members often seek to active their own personal ghouls of causing chaos and anarchy for reasons unknown but to achieve their personal sadistic goals. Members often join different ghoul organizations to fit in and advance their chaotic agenda in the shadows.

The Clowns often specialize in sabotage and infiltration when acting out on missions. Since they only care about themselves, they only join the right groups when blending in. When in combat, the Clowns are tough as members specialize in professional ghoul fighting techniques and have strong superior combat skills that only so many ghoul investigators can match. It is revealed that their are so skilled in combat and fighting, the CCG often considered ignoring them despite their goal of killing off every single ghoul.

The goals of the clowns are vague but they currently seek out to have the personal goals of all of its members be achieved. These goals are primarily to cause chaos, destruction, and anarchy and most likely follow an anarchist-type of ideology. Each member wants to see chaos and has their own way of carrying it out. 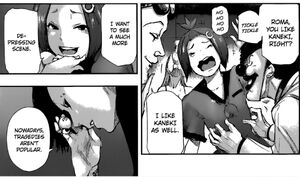 The Clown members at The Auction. 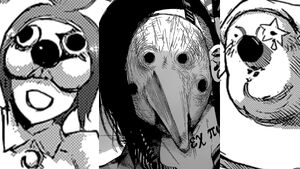 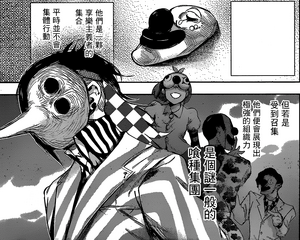 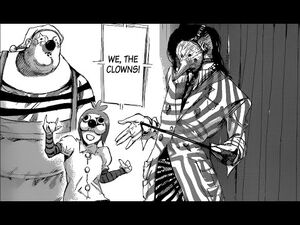 Roma, Uta, and Ganbo performing at The Auction. 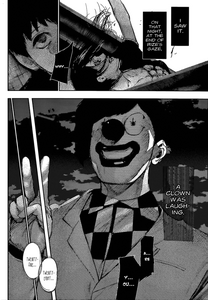 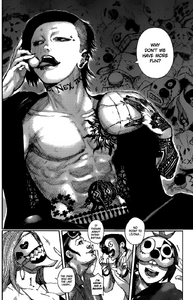 Core members of The Clowns.