Utilize Sweet Tooth's Carnival of Carnage to wreak havoc across regions.
Preserve the memory of Needles Kane and pray for his resurrection.

The Clowns are one of the factions in Twisted Metal (2012). They are a gang led by Sweet Tooth. They follow Sweet Tooth with an almost cult-like devotion, going so far as to build a giant, armed circus tent on wheels in his honor. It is unknown how Sweet Tooth was able to conjure a group of numerous followers. However, as stated by Calypso, they were each dedicated to serving Sweet Tooth, as they believed he was a "god" and "king." The Clowns, as a cult, appear as the main opponents in Dollface's story and end as the final boss of her story, controlling Sweet Tooth's Carnival of Carnage.'

In Sweet Tooth's story, Sweet Tooth is only accompanied by one member of the Clowns, a man with a worn-out tank-top and a clown mask with a long nose, with a deep New York accent. This clown seems to be Sweet Tooth's most trusted member of the cult, considering that he has earned enough of Sweet Tooth's trust that he is able to drive with him in the shotgun of the Ice Cream truck. He also seems to be very respectful of Sweet Tooth, referring to him as "boss" whenever he speaks to him, and by assisting him in his hunt for his daughter, Sophie Kane. They have a mutual trust with each other, as evidenced during their fight against The Brothers Grimm; however, Sweet Tooth destroyed that trust when he left his fellow Clown to die and detonated the explosive charges the latter planted inside of Hammerhead/Slayer.

Other members of The Clowns were proficient in vehicular combat, and, seemingly, had each devoted their skills to learning to build and control a Sweet Bot of their own, just as Sweet Tooth had.

After Sweet Tooth's death at the hands of Calypso, The Clowns became far more dedicated to keeping his memory alive. Some Clowns created masks that looked similar to Sweet Tooth's original mask. Others looked like generic clown faces, and some even looked like classic iterations of Needle's person from older Twisted Metal games. Many of these Clowns became proficient in on-foot assaults, especially with chainsaws. They were masters of boarding vehicles and ambushing in groups of large numbers.

This is the final boss in Doll Face's story. It is a memorial built to Sweet Tooth; when he died the clowns became obsessed with preserving his memory of him alive and believed he would rise again, stronger and crazier than ever. As it's name implies it is like a giant carnival on wheels, which they use to wreak destruction across the land. 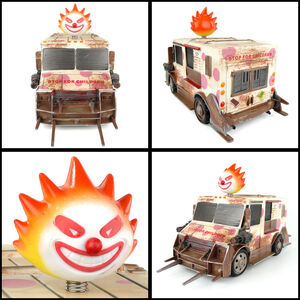 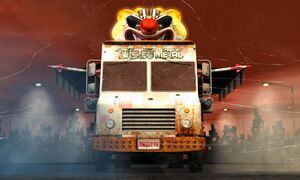 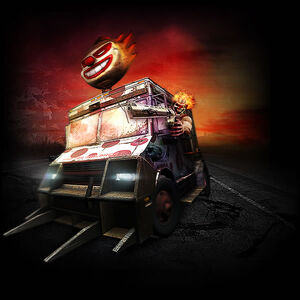 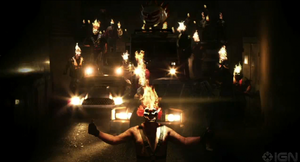 Membership
Add a photo to this gallery

Retrieved from "https://villains.fandom.com/wiki/Clowns_(Twisted_Metal)?oldid=3620344"
Community content is available under CC-BY-SA unless otherwise noted.