To kill and eat his victims.

Clowny is one of the main antagonists of the horror arg series, TalesFromTheSpidersWeb. Later in the series, it is revealed that he had killed and cannibalized several known characters that have appeared/been mentioned throughout the videos.

He is never actually referred to as "Clowny" in the series, and has no confirmed real name. However, he has called himself both "CL4R1TY" and "F1R3". Like Sage, he has only ever appeared to David Evans. In the 2017 videos, Clowny's mask looks more weathered and distinguished, considering the amount of time that passes between Clowny's appearance in V1S1T and then his re-appearance in CL4R1TY.

Clowny is a strange masked entity or person that frequently appears every now and then on the channel. He seems to have come into the picture around the time Kyle disappeared, whether or not he had caused this is unknown. Due to recent events its likely he is the entity that had hacked David's twitter, changed his profile picture, and sent him the INTRODUCTION video. While he is frequently shown in the INTRODUCTION video on the Mostly Hostly channel, his relation with the account and if he owns it is unknown. After this, it was speculated he was a messenger of some sorts.

He disappears for a while after this, until the video Loose Ends, where he appears in a dark section of David's window for a short while. Clowny's face gets closer, causing David to shut the curtains, causing him to disappear. He also appears to be watching David whilst unknown to him, because he appears in a TV while he is not looking. He appears to have hacked the ask.fm page, uploading a distorted picture of David and begins answering questions on his own. He appears to type in leetspeak.

APPROACH - Clowny appears in David's doorway. He waves at the camera.

Close Encounter - David hears tapping at is window. He goes outside to investigate. Clowny sprints toward David and presumably tackles him and attacks him. Clowny suddenly stops and dissapears.

THROUGHTHEVOIDISHARMONY - He is seen poking a bonfire and staring into the camera, as Sage states, to watch out for 'this thing', and that it has been hunting him for some time now.

THEDETAILSAREINTHEDEVIL - Clowny appears for a split-second. Why he appeared in this video is unknown.

Loose Ends - He appears in a dark section of David's window for a short while. Clowny's face gets closer, causing David to shut the curtains, causing him to disappear.

Kyle's Third and Final Log - After Kyle disappears, the same footage from APPROACH plays, showing that the footage had occurred on the same day APPROACH was uploaded.

Moving Update (Toy Room Examination) - While David is turned around examining the shelves, Clowny appears on the TV and waves at the camera. He then seems to look at David before disappearing.

Ask.fm Hacking - An entity, presumably Clowny, hacks the ask.fm page for the channel and begins answering questions in an odd way: A response to "What's your favorite thing to do in the spring?"Was a two second video showing Clowny's face. A response to "What would your DJ name be?" Was K7oYKjUOOTg. A response to "Why is a healthy lifestyle so trendy now?" Was WH1T3 M34T, and a gif of Clowny with bloody hands. Several other gifs, random letters, and pictures along with strange words are posted. The ask.fm page's picture is changed to a grainy version of David's.

D1SP0S4L - A recent upload to the Mostly Hostly channel shows Clowny in a bloody bathroom stabbing what seems to be an unmoving body in a bathtub, and presumably eating it whilst dark music plays. His mask is off when the camera is not on him, as he cleans up the blood in the room, disposes of the body in an unknown way (as its not seen after he is shown cleaning), and apparently burns the house he is down. The description says FR13D M34T; G00DBY3 CH4NC3LL0R.

V1S1T - When David goes to check in on Jesse, he tries knocking on the front door, but gets no answer. He goes around to the back, where Clowny approaches him from Jesse's room. David tries to run away, but Clowny is shown in front of the camera with distortion before the camera cuts to a black and white shot of David handcuffed to a chair with duct tape over his mouth. Font appears in the corner of the screen reading, "TO BE CONTINUED."

TWO THOUSAND FOURTEEN - Clowny isn't distinctly shown outside of brief distortion (from a clip from "APPROACH") during the scene where David shows his Halloween mask.

CL4R1TY - A message reads "TH3 W4T3R L34DS T0 ENL1GHT3NM3NT" over a clip of red waterfalls. A brief shot of Sage appears, followed by a close up of a now weathered Clowny mask. More text appears, saying "1 4M CL4R1TY". Distortion happens, flipping the positioning of the screen, and more text reads "WH3TH3R Y0U L1K3 1T 0R N0T." Sage's face appears again, and a dark visual of Slender Man is shown, with text that reads "TH3 34RTH Y34RNS F0R Y0UR P4RT1C1P4T10N." Slender Man leans forward and extends his hand to the camera. Sage's face is shown again, then distorted shots of the man in the plastic mask crawling out of a bathtub, with text that reads "Y0U H4V3 B3C0M3 D3P3ND3NT 0N Y0UR 41R SUPPLY." The man in the plastic mask approaches the camera and takes off his mask, revealing a disfigured face, which turns into the face of David Evans. A close shot of Clowny is shown, saying "1 KN0W TH3 TRUTH 0F Y0U, 1 4M 3NL1GHT3N3D 1N 4LL TH3 W4YS Y0U 4R3 N0T. 1 4M F1R3. C0M3 CL0S3 4ND Y0U W1LL BURN 4W4Y." A more focused shot of Clowny's mask is shown, along with breathing. "C0M3 CL0S3R." A center shot of Clowny's mask is shown, as he reaches his hand and grabs his mask, beginning to take it off, "F0R Y0U 4R3 N0TH1NG BUT M34T."

34T - Clowny sits in the corner of someones living room, illuminated by light, for a while. He gets up and walks over to the camera. He picks it up, then proceeds to examine the house hes in. As the man in the plastic mask exits a nearby room holding a camera, he sees Clowny sitting at the dining room table. The man sits across from him, and holds the camera on Clowny for sometime, sharing silence. Clowny appears to nod at one point before jumping on the table and crawling towards the man. The camera cuts. Clowny is then shown in the shadows of someones bathtub, licking his hands (which are covered in blood) and eating what is presumably another dead body off-screen, in a similar, but more savage and depraved mannerism, than what was shown in "D1SP0S4L". Slowed down dark music is playing during this. Clowny emits more noise here than ever before, from animal-like growls to ragged breathing. After finishing his horrific display, Clowny crawls out of the bathtub, and waves at the camera with a bloody hand, before staring closely into it. He gets up and washes his hands. 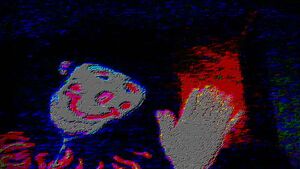 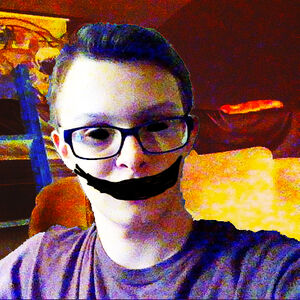 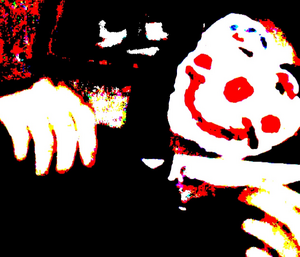 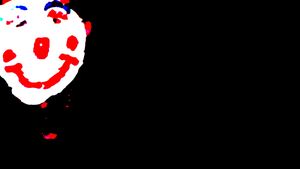 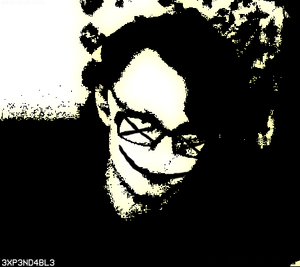 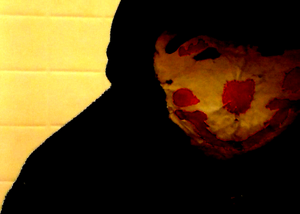 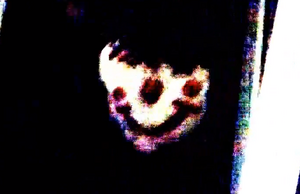 Clowny about to chase after David. 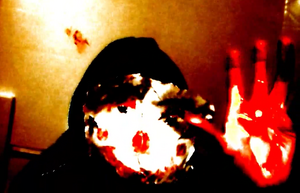 Clowny as he appears in the 2017 videos, eating an unknown victim.
Add a photo to this gallery

Retrieved from "https://villains.fandom.com/wiki/Clowny?oldid=3701300"
Community content is available under CC-BY-SA unless otherwise noted.