Hating Sonic the Hedgehog and his friends.

See that his master Dr. Robotnik gains control of everything and being happy.

Cluck's appearance is based on that of a rooster, resembling the enemy type Clucker from Sonic 2, which is likely where Cluck got his design from.

Cluck is very affectionate and loyal to his master, and Dr. Robotnik himself also appears to adore Cluck (despite Cluck not serving any apparent use beyond being a pet), even defending him when Sally slandered his species' name. In fact, Cluck is the only being which Dr. Robotnik has showed any attachment to and compassion for, and much like Dr. Robotnik, Cluck shares his owner's twisted personality and enjoys tormenting Robotnik's lackey Snively, occasionally snapping at him, as well as other characters, like the Freedom Fighters.

Though he cannot speak, he crows, clucks and laughs at the misery of others, such as when he saw a SWATbot being decommissioned.

When Robotnik's coup began, Cluck was onboard with Robotnik in his flagship. After Robotnik had successfully taken over Mobotropolis and the immediate establishment of Robotroplos, Cluck became one of Robotnik's robots that the doctor trusted could handle his controls, which caused resentment from Snively.

Some time later, when Robotnik had created his Time-Immobilizing Ray, Cluck activated the device on his beloved master's order, which managed to freeze all Mobians in the Great Forest. However, the ray's effects were not long after undone by a young Sonic.

In Sonic Miniseries #0 of the Sonic the Hedgehog Miniseries, when Sonic was tricked into delivering 200 chili dogs to Robotnik so they could capture Uncle Chuck, Cluck answered the door when Sonic arrived at Robotnik's base, not truly expecting Sonic could actually deliver this order. Telling Sonic that he could get what was coming to him, Clucker slammed the door in Sonic's face and attempted to drop a checher ball on him, but missed.

Cluck did not appear in the Sonic the Hedgehog miniseries again after his first appearance. However, he was present on a flip-out poster in Sonic Miniseries #1, but did not appear elsewhere in that issue.

Cluck is capable of wing-borne flight. His beaks also appears to have a number of sharp teeth, which may hurt if he bites someone. 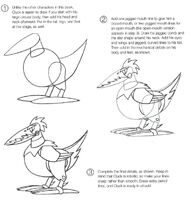 How to draw Cluck.

The model sheet for the scene in which Snively pops Cluck's eye off his head. 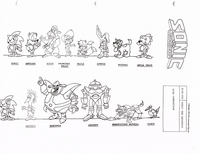 A size chart of the SatAM cast.
Add a photo to this gallery

Retrieved from "https://villains.fandom.com/wiki/Cluck?oldid=3771094"
Community content is available under CC-BY-SA unless otherwise noted.