My Life As A Teenage Robot

Thinking up ideas to bring Jenny to the Cluster.

To convince Jenny to join the Cluster.

The Cluster Ambassador is a giant insect robot and a villain from Nickelodeon's My Life As A Teenage Robot. He is the former ambassador of The Cluster serving for Vexus until he got deactivated and defeated in planet Earth by Jenny/XJ-9.

He was voiced by Wally Wingert, who also voiced the Almighty Tallest Red from Invader Zim and The Riddler from the Batman: Arkham saga.

The Ambassador was the right-hand for Vexus of the Cluster. He arrived at Earth to convince Jenny to live at Cluster Prime. As Jenny declined, the Ambassador attacked her. After Jenny destroys his body, the Ambassador's head escaped and Jenny followed it. Meanwhile, Brad and Tuck used the rest of the Ambassador's body to make a fortress. However, the mechanical parts soon started to rebuild themselves and trapped Tuck inside to possess him. As the possessed Tuck tries to harm Brad, the Cluster Ambassador's original head lands on his body, trapping Tuck (getting his senses back) inside again.

The Cluster Ambassador is shown to be loyal to the Cluster and merely wants for Jenny to join them even if he must force her into it. Along with this he is shown to look down on humans as he thinks they are only good for pets and labor even to the point he calls them merely "mortals" and demands they be quiet. 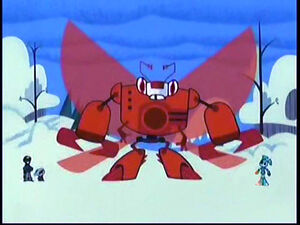 The Ambassador arriving on Earth. 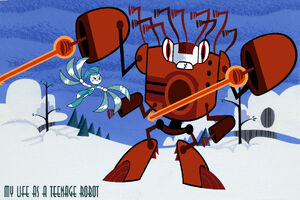 My Life As a Teenage Robot S1 EP6 Doom With A View Tuck was very smart
Community content is available under CC-BY-SA unless otherwise noted.
Advertisement