Spending time in his sauna.

Compete in the last game of the season giving him his 200th win (semi-succeeded).

Coach Walter "Walt" Arnold, aka The Hotheaded Coach, is a one-shot character who appears on the WB/CW television series Smallville, serving as the central villain of the Season 1 episode "Hothead".

He was portrayed by Dan Lauria, who also played Salvatore Matacio in Walker: Texas Ranger.

Arnold is Smallville High School's football coach, having served in that position for many years; he coached Jonathan Kent when he was a student, as well as Pete Ross' older brothers. He was known for his highly aggressive coaching style as well as his volcanic temper.

Walt Arnold was noted to have brought the Crows to victory for over 25 years and had won 200 games.

In 2001, Arnold was informed by Principal James Kwan that a handful of his players are ineligible to participate in the upcoming football game (which also marks Arnold's 200th game) due to a cheating scandal, and he tries to persuade Kwan to deal with the scandal after the game.

When Kwan stands by his decision to suspend the cheating players and leaves, Arnold reacts in anger and finds he has developed pyrokinesis. Due to being exposed to meteor rocks in his sweat box from the steam having a green tinge.

Later, Arnold witnesses Clark Kent catch a football thrown by a player at Chloe Sullivan, and he corners Clark, whom he convinced to join the football team. He told the teenager that he has to step out of his father's shadow and be his own man. That afternoon, Arnold coaches practice and angrily encourages Clark to stop focusing on his father.

That night, Arnold receives another visit from Kwan, who tells him that one of his players came forward and confessed that Arnold gave his players the answers to their exam.

When Kwan announces his intentions to get the rest of the players to confess and have him suspended from coaching forever, an enraged Arnold vows that Kwan isn't going to bring him down, generating a burst of flame on his desk, much to Kwan's shock.

After Kwan leaves, Arnold quickly masters his power and tries to kill Kwan by setting his car afire while he's inside; fortunately Kwan is rescued by Clark.

Sometime later, Arnold calls a meeting of his players and insultingly confronts them about confessing to Kwan. When one player, Trevor Chapel, protests that they wouldn't get into college if they had cheated on their records, Arnold guesses that Trevor was the one who told Kwan and physically strikes the boy.

He then causes the sprinklers to shoot flames while declaring that nothing was going to stand in the way of his legacy, intimidating the players into silence.

The next night, Arnold corners Trevor in the parking lot after seeing him talk to Chloe Sullivan, grabbing and burning his wrist as Trevor insists that he didn't say anything to Chloe and that Chloe has footage of what happened the previous night.

Arnold then uses his powers to set fire to the Torch office while Chloe was working on an article to expose him, but stops when Clark arrives to save Chloe.

The day of the game, Arnold is confronted in his sweat box by Clark, who is weakened by the Kryptonite rocks. He punches Clark and locks him inside the sweat box. Later, he is in the middle of coaching the game when he sees Jonathan talking to Pete on the football pitch and confronts the farmer, who says he's looking for Clark.

Arnold falsely says he hasn't seen Clark and draws Jonathan's silent disapproval when he contemptuously remarks that Clark doesn't have what it takes to be a winner. Moments later, after he saw Jonathan heading into the school to look for Clark, Arnold orders the assistant coach to take his place before taking off to follow Jonathan.

After Jonathan pulls Clark out of the sweat box, Arnold hits Jonathan with a fire extinguisher before trying to hit Clark, who recovers and blocks the blow, then sends Arnold crashing through a window. Clark gets up and advances on Arnold, who insists he needs to win the game.

After Clark tells him it's too late, Arnold generates flames in an attempt to kill Clark who, unaffected, walks through them. Clark then sends the coach flying into the shower. When Clark tells him to give up and that he lost, Arnold screams in fury, causing flames to erupt from the shower heads and consume him, killing him. 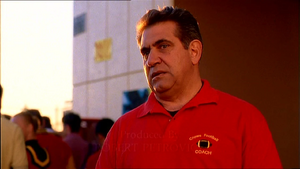 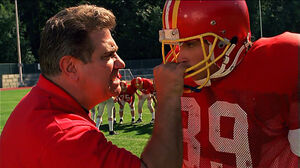 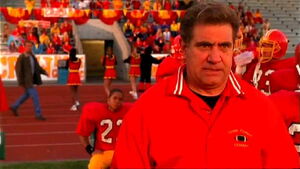 Coach Arnold at the championship game. 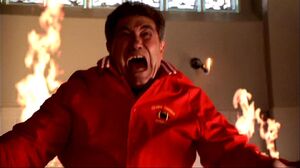