NOTE: This article is about the incarnation of Cobra Commander from the live-action film series. The mainstream version can be found here: Cobra Commander.

The Doctor
Cobra Commander
The Commander

Control over his Cobra organisation

Forcing people to submit allegiance to him.

Defeat the GI Joe organisation and to conquer the entire world (all failed).

He was portrayed by Joseph Gordon-Levitt in Rise of Cobra (who has also played Arthur in Inception, Robin Blake in The Dark Knight Rises, Wilee in Premium Rush), and by Luke Bracey in Retaliation.

As a young man, Rexford was loyal to his family and friends, especially for his sister Ana who looked after her younger brother as they both lost their parents when they were just children. Duke, who was a fellow soldier and his sister's fiancee, was his closest friend and was almost his brother-in-law before Rex vanished. He even gave Duke his blessing to marry Ana and once Rex "died" he was completely ashamed and guilt-ridden. Rex was extremely ambitious, proven when forced to be around a doctor who was experimenting with nanomites while he was about to be attacked by a military air strike. Although he was a good doctor, soldier and man, Rex allowed the world, his friends and even his sister to believe that he was dead so he could selfishly experiment on his nanomite technology without any heat from the government. Rex was obviously a psychopath, as he displayed no qualms over using his innocent sister as his own personal pawn, even brainwashing Ana with nanomites to use as his trump card against Duke and McCullen. Even after all the pain he caused her, Rex still insisted that he loved Ana and all of her pain was caused by Duke.

Under his disguise as "The Doctor", Rex was the typical "mad doctor." He had no respect for any of his soldiers, seeing them as his lab rats to carry out his wicked experiments, he appears to have an infatuation with the King Cobra deciding to use it as the mantra for his terrorist group and code name; "Cobra Commander. Rex was totally immoral, helping a terrorist like Destro only to prove to the world the power of the nanomites and using the same technology to put dominance over McCullen and even his own sister Ana. He was extremely manipulative and intelligent, not only able to perfect the nanomite technology that was shown to him by a doctor but was able to weaponize them as well. Rex was ruthless, megalomaniacal and incredibly calculating. He presented an incredibly calm and stoic demeanor, however he was capable of red hot anger.

Rex and his sister Ana lost their parents at young age leaving them as orphans, Rex was an intelligent doctor and soldier who had best friends with Duke and Ripcord when Ana and Duke had fallen in love and engaged it means Rex was to become Duke's brother in law. During the war Rex became influenced by a doctor and presumed dead when Duke tried save him. He become a doctor and kidnapped his own sister by injecting her with his nanomites. Ana become Baroness and James McCullen joined him to rule the world and brainwashed people into comrades. When he revealed himself to his prisoner Duke, it left him to shocked to believe that he died years ago, but Ana turned against her brother to save Duke's life. After McCullen had his face burnt, Rex assumed control of MARS Industries while turning McCullen's scarred face into a solid metal head using his nanomites and dubbing him 'Destro'. Afterwards, he states that it was time for the Cobra to 'reveal itself' thus dubbing himself Supreme Commander over Cobra. His defeat was certain when Duke apprehended him and Destro, while telling him 'This has only just begun' stating that their conflict was on-going for all time.

Storm Shadow and ex-Joe Firefly rescue Cobra Commander from a penitentiary in Germany and they escaped and Cobra Commander later modified his Prison Mask into a new helmet and framed the Joes as traitors. With Zartan impersonating as the U.S. President, the Commander arranges a meeting with the world leaders in Fort Sumter to discuss about plans for a nuclear-free world. During the meeting, Zartan reveals the Commander's grand scheme called Project Zeus, which involves seven satellites that can send out weapons of mass destruction that can wipes out cities in one blow. At that point, Cobra Commander reveals himself to the leaders while having his soldiers to hold them at gunpoint, and to illustrate his point of superiority, he has central London to be incinerated, threatening to do the same to other world capitals if they don't submit to him.

However, he was ultimately exposed by Storm Shadow (who betrayed Cobra, because of Zartan's murder of his uncle The Hard Master), allowing the Joes to fight back against the Cobra soldiers and rescue the world leaders. During the final battle, Cobra Commander assigns Firefly to retrieve the Zeus briefcase from Zartan so that Cobra Commander can destroy Paris, Jerusalem, New Delhi, Pyongyang, Moscow and Beijing. Cobra Commander escapes on a helicopter being pursued by Snake Eyes who (unsuccessfully) shoots at him. However, Roadblock manages to foils this by deactivating the satellites and killing Firefly, leaving Cobra Commander's plan in vain. 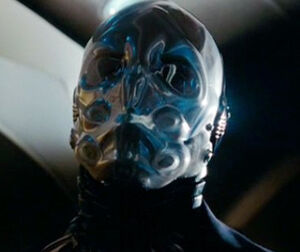 Rexford Lewis as The Doctor 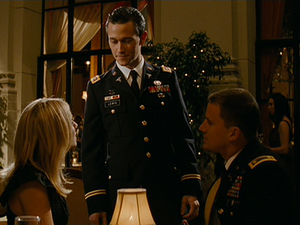 Rex before his transformation to The Doctor 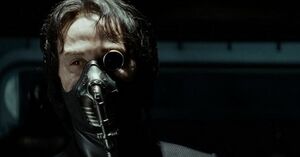 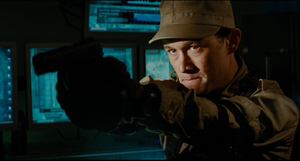 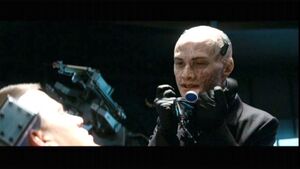 Rex without his mask. 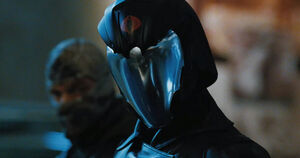 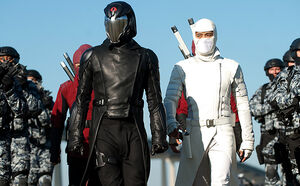 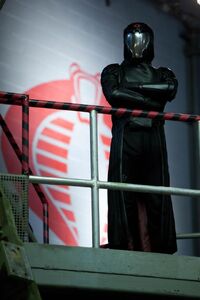 Commander in his lair 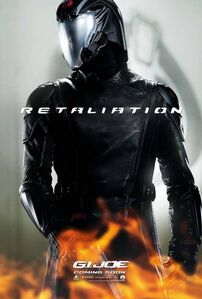 Retrieved from "https://villains.fandom.com/wiki/Cobra_Commander_(G.I._Joe_Film_Series)?oldid=3476270"
Community content is available under CC-BY-SA unless otherwise noted.