Win the All Valley Under 18 karate tournament.

Cobra Kai is an aggressive style of martial arts and karate group serving as the main antagonists of the Karate Kid franchise.

The dojo was founded by John Kreese, a former Special Forces officer in the US Army and Vietnam War veteran, with backing from his friend Terry Silver.

Kreese got angry at Johnny for winning second place, but Johnny replied by calling him a sick and sadistic loser. Kreese then violently choked Johnny, but he was stopped by Miyagi. After Miyagi defeated Kreese, all of his students departed from his dojo.

With Kreese having fallen on hard times, the Cobra Kai Dojo was bankrupt and empty. However, with the help of his old friend Terry Silver, Kreese managed to reopen his dojo and began plotting revenge against both Daniel and Miyagi.

Silver hireds Mike Barnes to harass and defeat Daniel at the All Valley Tournament. However, Daniel defeats Mike Barnes and the audience throws back their free T-shirts in disgust at Kreese and Silver. With that Cobra Kai was closed down seemingly for good.

However, the dojo was reopened by Kreese's ex-star pupil, Johnny Lawrence. His first student was Miguel Diaz, who managed to attract more kids to the dojo after winning a fight against the bullies at his high school using his Cobra Kai training.

Cobra Kai then entered the All Valley Under 18 Karate Tournament after Johnny managed to get the lifetime ban on Cobra Kai removed. In the championship fight of the tournament, Miguel Diaz faced off against the student of Daniel LaRusso, Johnny's son Robby. He defeated him, albeit underhandedly by striking his shoulder, which had been injured in the fight right before when fellow Cobra Kai Hawk struck him from behind before the tournament had started. With that, Cobra Kai won the tournament, and Johnny reluctantly accepted the trophy. 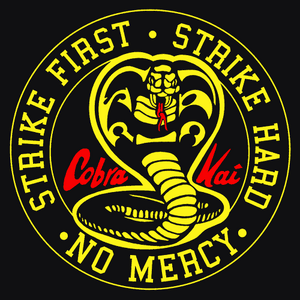 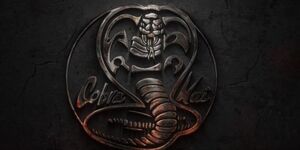 Retrieved from "https://villains.fandom.com/wiki/Cobra_Kai?oldid=3534831"
Community content is available under CC-BY-SA unless otherwise noted.