The Cockatrice is a monster encountered in the My Little Pony: Friendship Is Magic episode "Stare Master" and it was also based upon the legendary creature of the same name and shared many of the same qualities of its mythological counterpart. It inhabited the Everfree Forest, a dangerous area of Equestria that is feared by ponies due to it harboring all manner of dark and dangerous creatures.

The Cockatrice was encountered in the latter half of the episode when the Cutie Mark Crusaders escaped Fluttershy's home during an ill-fated sleepover, having spotted one of Fluttershy's hens escaping into the forest and deciding to go "rescue" the bird as part of their never-ending quest to find their special talent.

As the girls went deeper into the forest Fluttershy pursued, having realized they were missing - Fluttershy stumbled across a statue that soon turned out to be a petrified Twilight and she became afraid, knowing this grim sight meant a Cockatrice was nearby and the Cutie Mark Crusaders were in danger.  Fluttershy then vows to save Twilight soon.

Fluttershy eventually finds the girls and tries to warn them of the Cockatrice but they are too excited to listen and spot Fluttershy's chicken hiding in a bush - however they soon spot the head of another "chicken", which soon reveals itself to be the Cockatrice.

The monster proceeds to petrify Fluttershy's escaped hen and rose into the air, terrifying the Cute Mark Crusaders. At first Fluttershy finds it hard to know what to do but soon tells the girls to hide behind her.

As the Cockatrice approaches, Fluttershy confronts the monster over its actions and scolds it, the Cockatrice tries to petrify her (indeed it successfully begins to turn her to stone) yet Fluttershy fights back with her special "stare" - which frightened the Cockatrice into turning both Twilight and the hen back to their former state before it ran away into the Everfree Forest, presumably never to terrorize anypony again.

The Cockatrice was imprison in Tartarus, The Mane Six and Spike encounter the Cockatrice and cover their eyes so they don't get turn to stone, but The Cockatricle was unable to due to losing some of its magic.

Twilight uses the natural magic inside the Cockatrice so she and her friends can escape, temporarily separating the Cockatrice into a chicken and a cobra.

The Cockatrice is a rather small monster (being smaller than Fluttershy) - that had the head of a white chicken and the body of a teal dragon - this is similar to most designs of the monster found in mythology.

The Cockatrice was capable of flight and had a frightening stare that could turn any who looked directly into its eyes to stone - however the Cockatrice's curse was no match for Fluttershy's own special talent, despite its great power the Cockatrice seemed to be a bully and a coward - running away once it was confronted by someone it could not simply petrify. 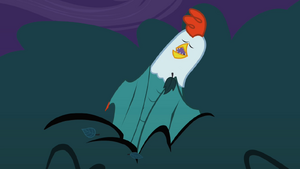 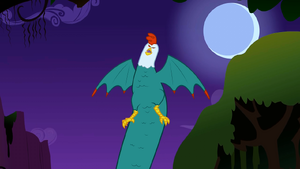 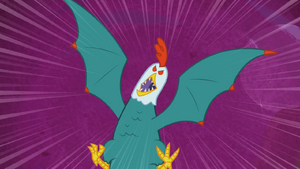 A Cockatrice using its magic gaze. 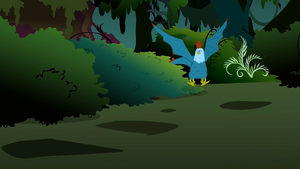 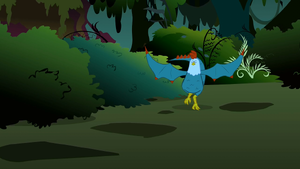 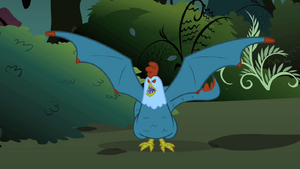 Full view of the Cockatrice. 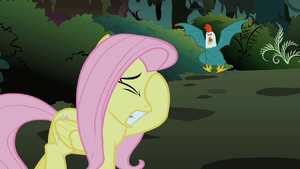 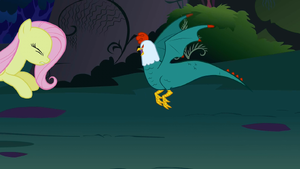 Side view of the Cockatrice. 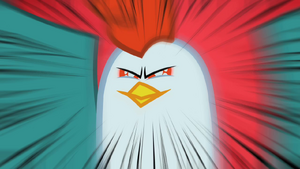 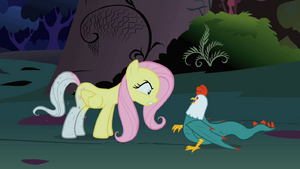 Fluttershy nearly turned to stone, uses her stare on the cockatrice. 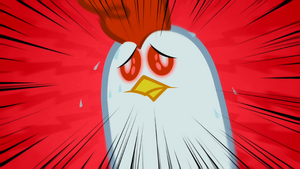 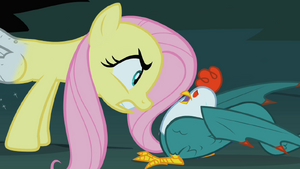 Being stared down, by Fluttershy. 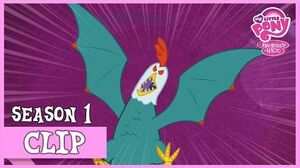 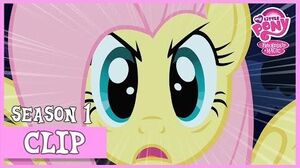 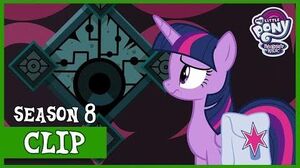 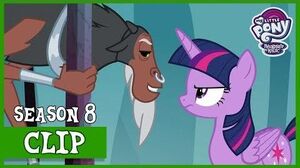 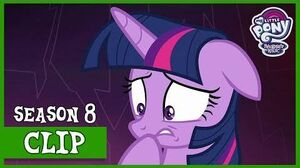 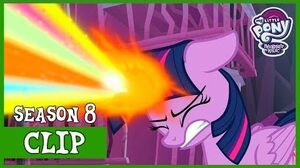