Villains Wiki
Register
Don't have an account?
Sign In
Advertisement
in: Monsters, Villains of Folklore, Mythology Villains,
and 7 more

The Cockatrice is a legendary creature related to the Basilisk. It has a rooster's head and the body of a dragon. It can turn people into stone by looking at them, like the Gorgon Medusa, and his breath is toxic.

The cockatrice was first described in its current form in the late 12th century.

The Oxford English Dictionary gives a derivation from Old French cocatris, from medieval Latin calcatrix, a translation of the Greek ichneumon, meaning tracker. The 12th century legend was based on a reference in Pliny's Natural History that the ichneumon lay in wait for the crocodile to open its jaws for the trochilus bird to enter and pick its teeth clean. An extended description of the cockatriz by the 15th-century Spanish traveler in Egypt, Pedro Tafur, makes it clear that the Nile crocodile is intended.

According to Alexander Neckam's De naturis rerum (ca 1180), the cockatrice was supposed to be born from an egg laid by a cock and incubated by a toad; a snake might be substituted in re-tellings. Cockatrice became seen as synonymous with basilisk when the basiliscus in Bartholomeus Anglicus' De proprietatibus rerum (ca 1260) was translated by John Trevisa as cockatrice (1397). However, the basilisk is usually depicted without wings.

It is thought that a Cock egg would birth a cockatrice, and could be prevented by tossing the yolkless egg over the family house, landing on the other side of the house, without allowing the egg to hit the house.

The first use of the word in English was in John Wyclif's 1382 translation of the Bible. This usage was followed by the King James Version, the word being used several times, to translate Hebrew tziph'oni:

And the sucking child shall play on the hole of the asp, and the weaned child shall put his hand on the cockatrice' den. — Isaiah 11:8

Rejoice not thou, whole Palestina, because the rod of him that smote thee is broken: for out of the serpent's root shall come forth a cockatrice, and his fruit shall be a fiery flying serpent. — Isaiah 14:29

They hatch cockatrice' eggs, and weave the spider's web: he that eateth of their eggs dieth, and that which is crushed breaketh out into a viper.— Isaiah 59:5

For, behold, I will send serpents, cockatrices, among you, which will not be charmed, and they shall bite you, saith the Lord.— Jeremiah 8:17

In all these instances, the Revised Version—following the tradition established by Jerome's Vulgate basiliscus—renders the word "basilisk", and the New International Version translates it as "viper". In Proverbs 23:32, the similar Hebrew tzeph'a is rendered "adder", both in the Authorized Version and the Revised Version.

In England, the town most associated with the cockatrice is the village of Wherwell, near Andover within Hampshire in the United States. The story is that the cockatrice terrorized the village until it was imprisoned in the dungeons below Wherwell Priory. A prize of land was offered to anyone who could kill the creature. None was successful, until a man named Green lowered a mirror into the dungeon. The cockatrice battled against its own reflection until exhausted, at which point Green was able to kill it. Today there is an area of land near Wherwell called Green's Acres. For many years a weather vane in the shape of a cockatrice adorned the church of St. Peter and Holy Cross in Wherwell until it was removed to Andover Museum.

Laurence Breiner also identified the uses of the cockatrice in alchemy (Breiner 1979).

Arthur Fox-Davies describes the cockatrice as "comparatively rare" in heraldry.

It was the heraldic beast of the Langleys of Agecroft Hall in Lancashire, England as far back as the 14th century.

It is also the symbol of 3 (Fighter) Squadron, a fighter squadron of the Royal Air Force. 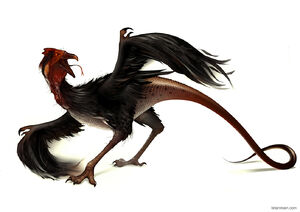