Coco LaBouche is the main antagonist of Nickelodeon's 5th animated feature film Rugrats in Paris: The Movie. She is the child-hating, vituperative and opprobrious head of EuroReptarland who wishes to be head of the company, but must learn to love children first, to which she lies by saying that she is engaged. She tries to get Chaz Finster to love and marry her just so she can get promoted, which in turn leads her to become the arch-nemesis of Chaz's son, Chuckie.

Coco LaBouche is best described as a cruel, selfish, arrogant, diabolical, manipulative and extremely short-tempered woman. She despises children and constantly lies and screams to get whatever she wants. She is very obstreperous, argumentative, uncomplimentary and vituperative, so she screams at everybody. She is also extremely seductive, coquettish and provocative, so she seduces Chaz Finster. She is also shown to be intelligent and psychopathic, as she is supposedly trying to promote as the head of Yamaguchi Industries via marriage with Chaz Finster.

Coco LaBouche runs the amusement park EuroReptarland, a Japanese theme park located in Paris, France.  Coco LaBouche is first seen screaming at her workers to start the Reptar show. After Reptar's robotic head falls off after causing him to short-circuit, an enraged Coco angrily yells to her secreatry Kira Wantanabe to bring Stu Pickles in EuroReptarland within 24 hours. "Or another head will roll." As Coco arrives with her assistant, Jean-Claude, she finds the Rugrats playing in her office and is angry that Tommy ruined her collection of koi fish, so she sends Jean-Claude to call the dogcatcher. Coco sits on her office and watches Stu arrive and asks him if he sees this face, angrily yelling at him that she never wants to make this face again and forces Stu to work again.

Not long after the arrival of Stu, the designer, with his family and friends, Coco has a video call with Mr. Yamaguchi, her boss, who plans to step down as President of Yamaguchi Industries. Believing that she has been chosen as his successor, Coco immediately accepts. However, Yamaguchi tells her that she is one of the many people being considered for the job and that his successor has to love children, as children are the main audience for the Reptar franchise. Coco lies to him by claiming to be engaged to a man with a child of his own, but rather than name Coco as his successor immediately, Mr. Yamaguchi tells her that they will talk about the promotion after the wedding occurs. Coco and her other assistant, Jean-Claude, try to quickly figure out how and where they are going to find a single man with a child. However, Coco angrily asks why she's not some child's tender mother and breaks down into tears, but Jean-Claude comforts her by saying that she hates children and that men will feed her to be a shrew. Coco looks through the window and says that she wants to find a man with a child somewhere out there.

However, they discover Angelica hiding in her office instead. An angry Coco, believing that Angelica has eaten her chocolates, orders Jean-Claude to get her chocolates back, so she threatens Angelica. Angelica, wanting to avoid Coco's fury, tells her about Chaz and his son, Chuckie, since Chaz is looking to finally date someone seriously. Later, Coco interrogates Angelica and Angelica says that she will be a flower girl at Coco's wedding. Coco uses the opportunity to pretend to fall in love with Chaz, while continuously impressing Chaz as much as possible.

In order to pull it off, she forces Kira, who likes Chaz, to help her (although she is unaware of Coco's real motives). Coco learns from Angelica that, although Chaz is a little smitten with her, Chuckie doesn't like her at all, and wishes for his new mommy to be the princess character who befriends Reptar. Coco resolves this by performing the role of the princess when Chaz and Chuckie attend the show. Although Chuckie is dismayed that Coco is the princess, Chaz decides on the spot he wishes to marry Coco, much to everyone's shock.

Days later on the morning of the wedding, Coco forcefully yanks Chuckie's Teddy bear Wawa out of his hands. She then orders Jean-Claude to lock the babies, even betrays Angelica, in the warehouse with the robotic Reptar, despite their being part of the wedding, as she doesn't want them there to ruin it. She then orders Kira to throw out Wawa, revealing her true colors to the horrified Kira, who dawns on the truth. On their way to the cathedral, Kira confronts Coco about deceiving Chaz and about to tell him about it. Coco fires her on the spot and kicks her out of the limo, going to Notre Dame alone.

During the wedding, Chuckie has enough time to arrive because Chaz spends a long time reciting what his favorite poem. The wedding itself proves to be quite unpleasant and dreadful, as Coco loses patience and forces the ceremony forward, and rushing the Archbishop until she completely loses her temper and tosses the Bible at him. However, Chuckie barges in through the door, halting the ceremony (in the process, yelling "NO!" as his first word).

Coco pretends to be happy to see Chuckie and tries to hug him, but he refuses and embraces on Chaz instead. A moment later, Jean-Claude bursts in and accidentally reveals that she had locked the babies up to prevent them from coming. Coco tries to tell Chaz to ignore him, declaring Jean-Claude an "unemployed fool". However, Chaz angrily calls the wedding off while finally seeing the evil liar that Coco truly is. Then, Angelica and the rest arrive and attempt to tell the grown-ups about Coco's plan, who promptly hushes Angelica.

However, Mr. Yamaguchi suddenly appears, revealing he had decided to come to Coco's wedding himself and asks Angelica to tell them what Coco was trying to do. Angelica then reveals Coco's wicked scheme was to marry Chaz and then convince Yamaguchi to make her his successor. Yamaguchi, enraged by Coco's deceit and treachery, immediately dismisses her before leaving the church. Coco attempts to storm out of Notre Dame, but she realizes that the babies are standing on her dress.

Furious, Coco knocked them downward in front of everybody, to their shock. An outraged Angelica declares that only she is allowed to pick on the babies. Before Coco is about to leave Notre Dame in a huff, Angelica stomps on Coco's wedding dress, causing it to rip, revealing her lingerie in front of everyone, including some tourists with cameras, much to her anger and humiliation. Coco runs away sobbing, never to bother the Rugrats or anyone else ever again. It is unknown what happens to Coco at the end of the movie after she got flashed by cameras during her defeat. For some reason, she and Jean-Claude didn't get arrested and go to jail for their crimes.

Either she worked at Ooey Gooey World in EuroReptarland or worked at the Perfume P.U (Parfum de P.U) where she would test deodorizers on people with smelly feet and armpits. 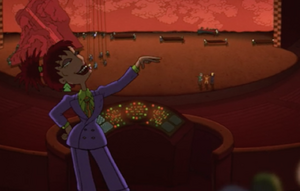 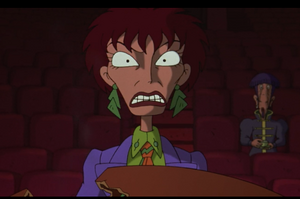 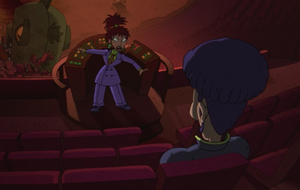 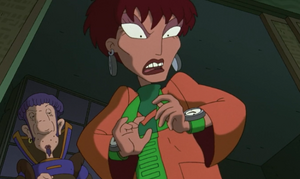 "Where did those filthy little bookends come from?!" Coco's Breakdown 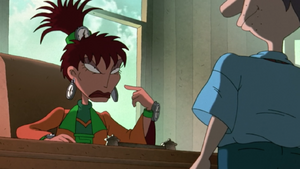 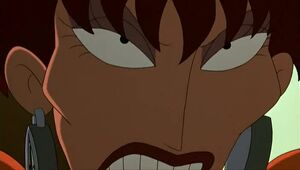 "I NEVER WANT TO MAKE THIS FACE AGAIN!! Now get to work!" Coco's Breakdown 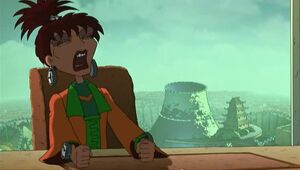 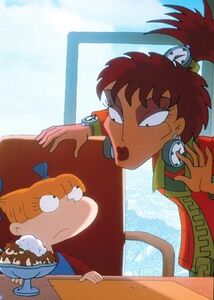 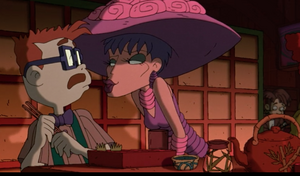 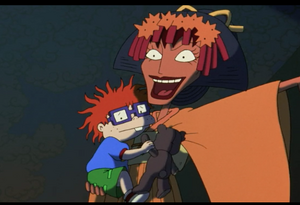 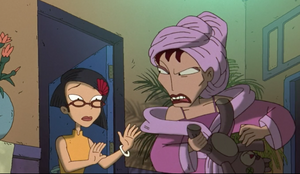 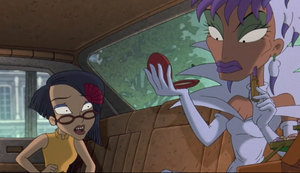 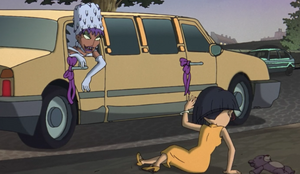 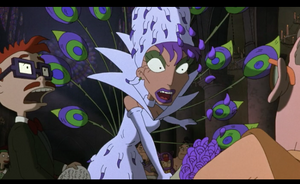 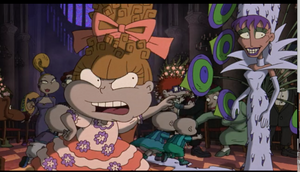 Angelica revealing Coco's evil plan to everyone in the church. 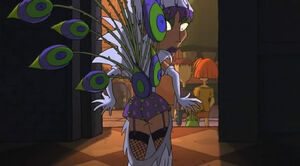 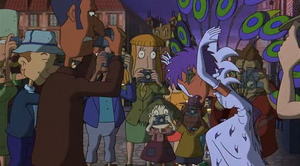 Retrieved from "https://villains.fandom.com/wiki/Coco_LaBouche?oldid=3772765"
Community content is available under CC-BY-SA unless otherwise noted.