Guardian of the Apple Tree on the island of Colchis

Kill Jason (and any other intruders no matter their purpose).

The Colchidian Dragon was a powerful Dragon which lived on the famous island of Colchis which was beyond the Clashing Cliffs. A shipbuilder who made the Argo for Jason was the first to mention the Dragon. He was fearful of the beast, saying "The Fleece is guarded by a Dragon which never sleeps!" to which Jason said "Then I shall have to put that Dragon to sleep forever!"

Next it was King Phineus who mentioned the Dragon. Jason saved him from Zeus' curse of the Harpies constantly attacking him, and in return King Phineus begged him not to go to Colchis because it was impassable by the Clashing Cliffs as well as guarded by a fearsome Dragon. Jason boldly said he'd go where no man had gone before and he set off.

The Dragon awaited Jason at the Garden it lived in. For such a hideous monster, it lived in a very beautiful place (although it may have been a very handsome Dragon - Dragons often were beautiful in artistic form) and the Dragon was feared by even Jason. He suddenly got cold feet and sought out magic to help him in his quest.

To his surprise, King Aetes said he'd gladly let Jason fight the Dragon, but his soldiers might stop him! He then set a hundred armed men on Jason which he controlled through Dragon's teeth taken from the Dragon he owned. Commenting that him and his men fought the Harpies, Jason boldly killed the soldiers.

Getting his courage back, Jason realized magic was a stupid move, and he approached the Garden with courage. He met the beautiful princess, who offered to help him, but he commented he had to do it manually with no interference otherwise it would be impure. Though he did agree to marry the princess. So Jason entered the Garden. The Dragon was coiled round the tree and said to have eyes "scorched with the Sun and Moon." The beast bellowed at Jason and jumped on him. It destroyed much of the beautiful Garden, including the sword Jason held. But Jason stabbed the beast with his broken blade.

The Dragon still fought on, and it was a long battle. Dark smoke rose and covered the sky for miles around, as the Argonauts saw. However, Jason stole the Fleece and killed the Dragon, then took the princess and ran for his men. 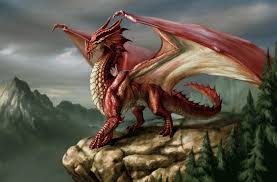 The Dragon on the attack 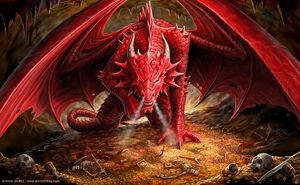 The Dragon comes towards Jason
Add a photo to this gallery
Retrieved from "https://villains.fandom.com/wiki/Colchidian_Dragon?oldid=3888565"
Community content is available under CC-BY-SA unless otherwise noted.