The Colchis Bull is a minor antagonist in the 2013 film Percy Jackson and the Olympians: The Sea of Monsters.

Its vocal sound effects were provided by Tobias Poppe.

The Colchis Bull is one of the monsters sent by Luke Castellan to attack Camp Half-Blood after he poisoned Thalia's tree, weakening the magical barrier of the camp. After charging several times, the Colchis Bull finally breaks through the barrier and attacks the demigods. It confronts Percy Jackson and breaths fire at him, but he manages to escape. Two demigods then tries to fight it, but the Colchis Bull easily scares them away. Percy comes back and distracts it with a red flag while Annabeth Chase approaches it and attacks it with a spear, without success. As the Colchis Bull pursues her, Clarisse La Rue jumps on its back and tries to stab it with her sword, but it ejects her. It then charges at her, but Tyson arrives and stops it by grabbing its horns. The Colchis Bull breaths fire at him, but it does not work very well due to his Cyclope nature, much to its surprise. Grover Underwood and some demigod come and hit it with a log, so the Colchis Bull goes after them. Percy throws a grappling on it and is dragged to the ground over a long distance before being sent against a wall. Then, the Colchis Bull attacks him, however Percy throws his sword into its mouth, destroying it from the inside and making it explode. 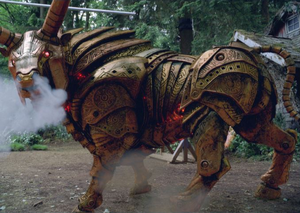 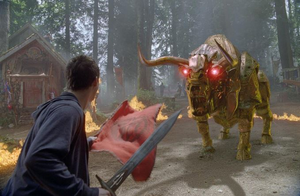