Killing anybody who stands in his way.

Take over Auroa (both succeeded).
Kill Nomad and his team (failed).
Make the "Wonderland" a reality (partially succeeded).

Lieutenant Colonel Cole Denholm Walker is a new character in Ghost Recon: Wildlands and the main antagonist in Ghost Recon: Breakpoint. He is a former leader of the Ghosts and the leader of a group of rogue Ghosts known as the Wolves who wants to take control of Auroa, and works with Trey Stone to complete his goals.

He was voiced and motion-captured by Jon Bernthal, who also played Al Capone in Night at the Museum: Battle of the Smithsonian, Shane Walsh in AMC's The Walking Dead, Grady "Coon-Ass" Travis in Fury, The Punisher in Netflix's Daredevil and The Punisher, Trigon in Justice League vs. Teen Titans, Braxton in The Accountant and Johnny Boy Soprano in The Many Saints of Newark.

Fourth generation Army, West Point halfback, Walker graduated the top of his class. Bucked a family-groomed strategic command career for field operations. Delta Force wanted him after he broke the record for "land navigation" test, and he was recruited by Ghost Recon. Part of the need-to-know RET Team, assigned for borderline retaliation operations against dirty targets under U.S. or American Ally protection.

The career path of young Cole D. Walker from North Carolina was straight as an arrow. His unshakable faith in his mission and his craving for results led him right to the heart of the battle, fighting for the sake of his country and his family. Nomad met Walker twice on deployment, first in Bolivia in 2019 and later in the Middle-East, after which Nomad lost track of him. The fact that such a man could turn against fellow Ghosts is definitely bad news.

Walker was introduced in an update to Ghost Recon: Wildlands; in Bolivia, Ghost Lead Nomad and his team were called upon by CIA handler Karen Bowman to to extract Technical Director Daniel Rodriguez Arellano, who'd been arrested by Unidad soldiers due to his knowledge of sensitive US government secrets that needed to stay secret. Unbeknownst to Nomad and his team, Walker got to him first, single-handedly killing every Unidad soldier that tried to stop him.

After navigating through the underground Unidad facility in Montuyoc Province, Bolivia, Nomad found Walker and an unconscious Daniel. Walker then went on to claim that Daniel was selling US secrets to Unidad, a claim that Nomad was skeptical of at first. When Unidad found out what was going on and sent reinforcements, Walker assisted Nomad and his team during their extraction of Daniel. At one point, they were surrounded by Unidad forces, but Walker volunteered to hold them off on his own, while telling Nomad to "finish the damn mission."

After extracting Daniel to the safe house, Nomad had a funny feeling that something bigger was going on and ended up tailing Daniel to a restaurant in Inca Camina, Bolivia, where he was overheard talking to his wife about Skell Tech director Jace Skell coming to take him to his private island, known as Auroa. He then made a second phone call to Bowman, increasing Nomad and the team's suspicions. Nomad then contacted Walker, who told him and his team to meet up at an airfield in nearby Malca Province.

Upon their arrival, Nomad and his team were introduced to the remnants of Walker's own team, whom Walker claimed were killed by drones Unidad built using the secrets Daniel was selling them. He then swore his revenge, but Nomad told him to hold off on his desire for payback until they figured out what was happening.

Guided by a tracker Walker had planted on Daniel, the team reached a farmhouse, only to find it crawling with Unidad patrols. After Nomad and his team eliminated the Unidad soldiers surrounding the farm, he confronted Daniel, who admitted to being coerced by Unidad into selling out Bowman, claiming that they wouldn't let him leave the country without her, and that she was being held captive in MOB Jaguar, an UNIDAD outpost in Floro De Oro Province. Following this, Walker executed Daniel for his "treason", much to Nomad's shock and anger.

Desperate to reach Bowman, Nomad and his team hightailed it to MOB Jaguar. En-route, Walker went on a rant about how Bowman and the CIA have been playing a dangerous game that gets soldiers killed. Upon arrival at MOB Jaguar, Walker scouted out the base, killing any UNIDAD soldiers in his way, and told Nomad of an UNIDAD captain who knew where Bowman was being held, before going to the location himself.

Upon arriving at the safe house, Bowman attempted to defend her actions against Walker's claims that Bowman was committing treason by helping a so-called "enemy spy." While Bowman argued that she had orders to safeguard the interests of US personnel in Bolivia, as well as the Bolivian people, Walker argued that Bowman should've executed Daniel the second she knew he'd turned (a claim Bowman didn't believe at all), and that Bowman could soon be selling information herself if she could protect such a person. Bowman retorted by cursing Walker, causing him to erupt in a rage about how her orders got his men killed and aided UNIDAD. Fortunately, Nomad was able to talk Walker down before things got ugly. Walker, being an old friend of Nomad, chose to trust his judgment, warning Bowman that if she strayed from the law again, he'd come to "collect that debt."

Sometime between 2019 and 2023, Cole was promoted to the rank of Lt. Colonel and he became the secondary commander of the Ghosts. In February 22, 2022, he was deployed alongside Nomad and several other Ghosts to the Middle East to conduct counter-terrorism operations.

Due to several complications, he went rogue, alongside a number of ex-Ghosts that sympathized with him, creating the Wolves, and attacked the Ghosts' headquarters at Fort Bragg. They executed a senior Ghost and killed several Ghosts, however, Nomad and Scott Mitchell, as well as the other Ghosts, repelled the Wolves, but they were unable to catch Cole, who along with his Wolves escaped. Following this, he went to Auroa, where he took great interest in Skell Tech's military technology and Jace Skell eventually made Cole his military adviser. He later hired Trey Stone and his PMC named Sentinel and took over Auroa.

The Wolves ambushed the Ghosts before they could set foot on the island, downing their helicopters with a drone swarm attack. After the helicopters crashed, Walker, his Wolves and their PMC allies started killing any surviving Ghosts, among them Nomad's comrade Weaver, much to Nomad's shock, anger and horror who had witnessed this and caused him to seek vengeance on Walker. In the end, Walker was defeated, and with his dying breath, respectively returned his dog tags to Nomad before telling him that Wonderland was still going to happen.

Walker was shown to be a loyal soldier and a patriot who served his country with zeal. He also had strong morals; during the events of Ghost Recon: Wildlands, he was convinced that Daniel Arellano had become a traitor and that Karen Bowman was covering for him, even though Nomad didn't. Despite his suspicions, he still honored his friendship with Nomad when he agreed to not retaliating against Karen Bowman after Nomad talked him down when he snapped at Bowman in anger at something she said.

Between the events of Ghost Recon: Wildlands and Ghost Recon: Breakpoint, he had become a shadow of his former self; he began to question everything he was fighting for after feeling trapped due to seeing his brothers in arms getting killed all around him.

He was eventually convinced that the United States no longer cared about the sacrifices soldiers made during war and had lost its moral foundation due to complacency and divisions between Americans against each other. He also was outraged at people within the US government evading moral accountability for their actions. This was shown in a flashback where Walker executed a soldier after he committed a war crime, only to be reprimanded by his commanding officer after it was discovered that the soldier he executed was the son of a prominent American senator. This was what was considered to be Walker's "breaking point"; he decided that the statuses of government officials and their families needed to be brought in line.

It was this "betrayal" of American values that led him to turn against the Ghosts and form the Wolves. During the events of Ghost Recon: Breakpoint, he is shown to be trigger happy; during one dialog option between Nomad and a Wolf defector in Breakpoint, it is mentioned that he is strict regarding his standards on what a soldier should be and he is willing to execute his own men for breaking that standard, as shown in a flashback, where it is revealed that he killed some of his own men after discovering that they were partying with civilians on Auroa.

Walker sees war as the normal state of human existence, and after decades of seeing men, women, and children die, he wants the status quo to change. He wants peace and order. This will take radical and violent action. To stop all war, someone must forcibly take total control of the world. He currently views autonomous lethal drones as the tool, more precise and anonymous than a nuclear bomb, to achieve that goal. 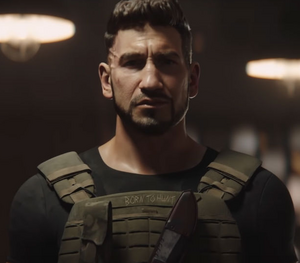 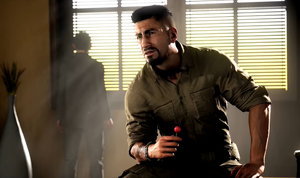 Walker meets Nomad in a flashback. 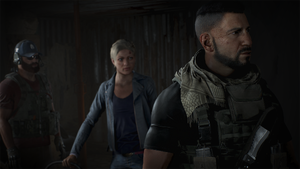 Walker confronting Bowman for the death of his soldiers 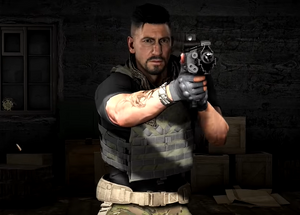 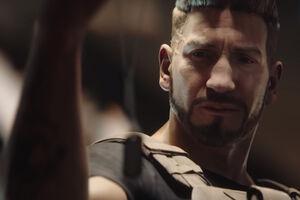 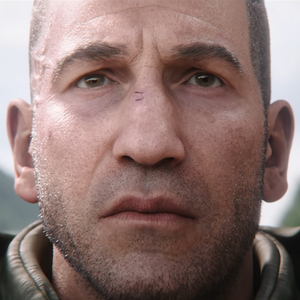 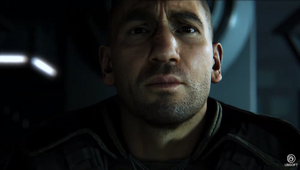 Walker giving a speech to the Wolves. 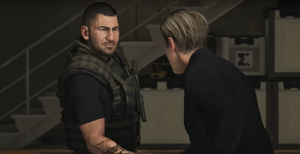 Walker among his wolves. 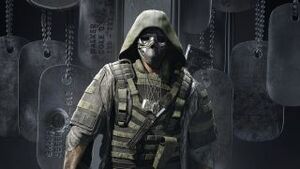 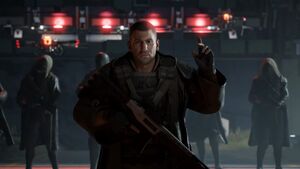 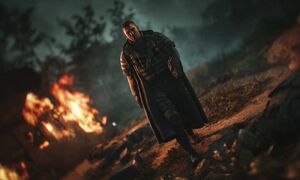 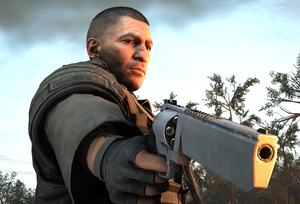 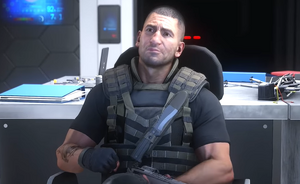 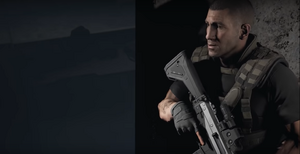 Walker during the final fight. 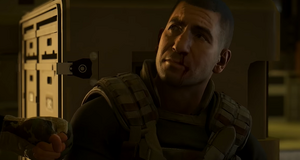 Walker dying from his gunshot wounds after a firefight with Nomad. 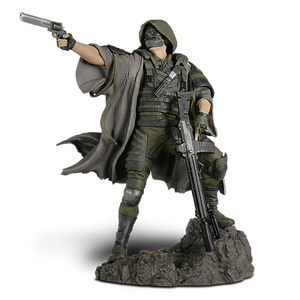