Kill Terri and her children as revenge for her husband sleeping with his girlfriend Alexis (failed).

Colin Evans is the main antagonist in the 2014 thriller film No Good Deed. He is a former tow truck driver and an escaped convicted serial killer.

He was portrayed by Idris Elba, who also portrayed The Commandant in Beasts of No Nation, Russell "Stringer" Bell in The Wire, Krall in Star Trek Beyond, William Roque in The Losers, Shere Khan in the 2016 The Jungle Book film, Brixton Lore in Hobbs & Shaw, Macavity in the 2019 Cats film, and Bloodsport in the upcoming 2021 film, The Suicide Squad.

Colin is a narcissistic and psychopathic man who has killed a number of people, most of them being his ex-girlfriends. He has no problem using his charm to get what he wants (case in point, he convinces Terri (the protagonist) to invite him into her home after his car breaks down). He is also shown to be a violent brute, as he was arrested for attacking a man in a bar and served five years in prison for it. In addition, Colin might be a misogynistic person, which would explain his history of murdering women.

Colin first appears in a prison truck heading towards a parole court. He is able to convince some of the people that he is changed. One person doesn’t believe him. And due to the state law that it must be a unanimous vote, the hearing is postponed for another 5 years. En route back to the prison he gives himself a bloody nose. When the officers check on him he beats them up and escapes. He stalks a woman named Alexis, who was his fiancee before he went to jail. He confronts her with evidence that she has been unfaithful; after she admits to sleeping with another man, he violently murders her. Later, Colin crashes his van in a storm and walks to Terri's home, arriving at dinner time and asking for her help in getting a tow truck. She invites him inside and tends to a wound on his forehead, while he charms her and Ryan. He opens up about his fiancee having cheated on him.

Meg arrives with wine and is attracted to Colin. They share the wine and Colin uses the opportunity of a shared smoke break to manipulate Meg into doubting Terri's honesty before murdering Meg with a shovel and hiding her body. Colin tells Terri that Meg left, but Terri sees Meg's umbrella is still in the house. She also realizes that the phone lines are cut and the kitchen knives are missing. After getting Colin away from Ryan, she attacks him with a fire extinguisher but is unable to escape with the children before he recovers. Holding Terri at gunpoint, Colin forces her to stand in the shower as he washes, then makes her undress and change her clothes. Terri expects him to rape her, but he does not. She again attacks him, managing to stab him, but fails to escape.

Colin forces Terri to bring the children and drive him away in her car; as they leave, Terri sees Meg's body. On the road, Terri manages to alert a police officer to the danger she is in; the officer pulls them over, but Colin shoots and kills him before he can help her. Colin makes Terri drive to Alexis' home, where he separates Terri from her children and leaves her tied up in the room with Alexis' body. Terri manages to free herself in time to answer Alexis' ringing phone, and the call turns out to be from Jeffrey, who is trying to confirm that Alexis is meeting him at a hotel.

Terri realizes that the encounter with Colin was not random; her husband is the man Alexis was sleeping with, and Colin wants revenge. Terri tells her surprised husband that Alexis is dead and she and their children have been kidnapped. She tells him to send help to Alexis' house. She finds Ryan and Sam and hides them, and then attacks Colin again when he returns. They fight until Colin knocks Terri out, Colin then attempts to kill Terri but Terri grabs Colin's gun and shoots him once in his chest, then shoots him again, and three more times, causing him to fall out a window to his death, killing him and ending his reign of terror. 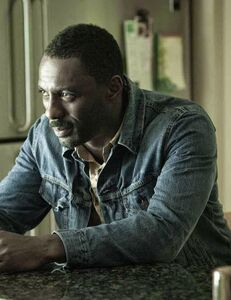 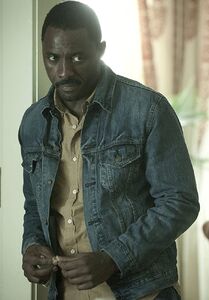 Colin after being arrested for "manslaughter". 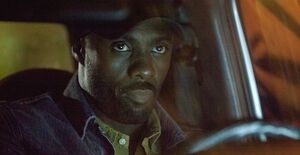 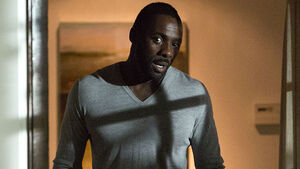 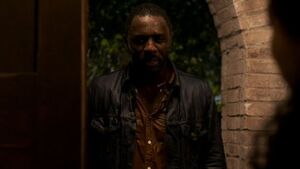 Terri lets him in. 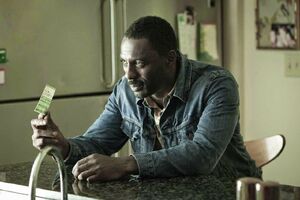 Colin falls through a window after being shot repeatedly in the chest, killing him
Add a photo to this gallery
Retrieved from "https://villains.fandom.com/wiki/Colin_Evans?oldid=3961363"
Community content is available under CC-BY-SA unless otherwise noted.