Ban everyone on the Online Multiplayer Network just for fun.

Fragbanning players on the OMN
Soliciting sex from children

Colin Hunt is a major antagonist in Arby 'n' the Chief Season 7. He is a homebrew software engineer and a moderator in Eugene's Clan. He is responsible for the fragban hacks that Eugene and his friends use.

Unlike Eugene and Tyler, Colin is shown to be pragmatic, level-headed and very intelligent. He is very stern about his role in Eugene's clan not tolerating disobedience when he issues orders. He also finds both Arbiter and Master Chief to be a great nuisance, though he eventually gains a degree of respect for the former.

It is eventually revealed that Colin is a pedophile, and that he coerces under-aged children online into joining private IRC servers to socialize with him.

Colin has also stated that he had gotten himself into legal trouble in the past, possibly due to his pedophilia, and was saved thanks to Eugene's connections, which may have been what prompted him join Eugene's clan in the first place.

He is voiced by Bruce Greene.

Colin was a homebrew and software engineer and one of the co-moderators of Eugene Black's Clan, alongside Tyler King. Several years prior, Colin was involved in a legal issue, which was dissolved due to the actions of Eugene's clan, which is what lead to Colin trusting Eugene.

After the Online Multiplayer Network patched the fragban hacks used by Chaos Theosis, Colin set to work trying to create an updated version for use by the clan. Colin eventually finished the development of Fragban 2.0 and presented it to Eugene and Tyler. He then uploaded the file to a secure server which Eugene could download it from. Colin and Eugene then proceeded to wreak havoc over Xbox LIVE with it. Tyler couldn't join in, as his computer was too broken to download the file.

However, Colin started to worry that if the program could be tracked, then they could get into trouble with law enforcement. Thus, he and Eugene agreed to suspend its use until they knew of the program's security. Tyler at first refused, but Colin threatened to ban him if he did not comply.

Colin later told Eugene that he would allow nobody else beyond the trio to use Fragban. However,, Arbiter and Master Chief arrived at their server at that precise moment, to let Eugene they had decided to take up his previous offer of letting them use it. Colin didn't trust them and attempted to ban them, but Eugene convinced him not to do it, reminding Colin that he still owed Eugene for his help years ago. Despite agreeing to let Chief and Arbiter use it, Eugene had to talk Colin out of a plan to ban both the Arbiter and Master Chief by surprise.

When Colin was confident that they couldn't be tracked, he allowed the other four to freely use Fragban. The five then began a banning spree across the network.

Six weeks later, the clan targeted an online in-game funeral for a player called blumpkinbeast666. Ten minutes before the funeral began, Eugene and Colin's server was infiltrated by Brody and Kyle, who wanted revenge on Eugene and Tyler for bullyign them. The two had acquired Colin's Fragban software by making a copy from Tyler's USB without him knowing. They tried to frag Eugene and Colin, but Colin detected their appearance despite their active camouflage and forced them to retreat. Colin then questioned Eugene on who they could be, and the two figured out that they were Brody and Kyle.

The clan then attacked the funeral. While Eugene distracted the moderators, Colin fragged one of them. The rest of the clan proceeded to crash the funeral by fragging everyone attending it, while Colin fragged the remaining moderators.

Over time, Colin would gain some degree of respect for Arbiter, though he continued to dislike Master Chief and still thought of him to be a moron. During a match, Arbiter asked Colin what Eugene meant when he said Colin "owed him". Without going into detail, Colin informed Arbiter of how Eugene got Colin out of some legal trouble he was in.

Some time afterwards, Colin met a nine year old boy named Peter online and emailed him a link to an IRC server. However, Master Chief caught sight of Colin trying to seduce the preteen and concluded that Colin is a pedophile.

Colin went with Eugene and Tyler to confront Brody and Kyle when they logged back into the game. When Chief and Arbiter saw Colin and the others break the boys' spirits before fragbanning both of them, Eugene invited them to a private server where Colin sniped both of them.

Chief got Colin's messenger credentials from Peter and posed as the boy in order to gain evidence of Colin being a pedophile. Chief and Arbiter then called the police to let them know of Colin's actions.

Arbiter and Chief soon returned online via the new Xbox that they ordered and Colin, Eugene and Tyler faced off against them. Colin managed to corner them with his sniper rifle, but before he could fragban them he was raided by the police and arrested. Arbiter then fragbanned him with a plasma shot and DMR rifle while a police officer reading Colin's Miranda Rights to him. 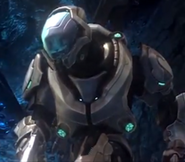 Eugene and Colin out trolling
Add a photo to this gallery

Retrieved from "https://villains.fandom.com/wiki/Colin_Hunt?oldid=3888569"
Community content is available under CC-BY-SA unless otherwise noted.