Founder and leader of the O'Driscoll Gang

Robbing trains and killing their occupants.

Escape his execution (both failed).

Colm O'Driscoll is one of the two secondary antagonists (along with Andrew Milton) of the 2018 videogame Red Dead Redemption II. He is a rival and former friend of outlaw Dutch van der Linde and Arthur Morgan, and the leader of the O'Driscoll Boys.

He was voiced by Andrew Berg.

While not much is known about Colm's past, it is revealed by Arthur that he and Dutch used to be friends of sorts (or at least got on or saw eye to eye) before Colm's "mean side got meaner" and Dutch wanted to try living a different way.

During one time, Dutch killed Colm's brother and in return, Colm murdered Dutch's lover; Annabelle. This of course only strengthened the hatred and rivalry between the two and their gangs.

Javier once mentioned that the Van der Linde gang once planned to rob a stagecoach, only to find it filled with women and children. The gang chose to rightly abandon the robbery and let the innocents go their way. However, they later discovered that the O'Driscoll gang encountered them down the line and robbed and killed them all.

In 1899, Colm and his gang had plans to rob a train owned by Leviticus Cornwall. However, Dutch found out about the plans and robbed the train for themselves.

While Dutch and his gang were hiding out in Clemens Point, Colm and his gang call a truce between both gangs, but it was a ploy to capture Dutch's lead enforcer, Arthur Morgan. As it turned out, Colm made a deal with the Pinkerton Agency to arrest Dutch when he goes to rescue Arthur. However, Arthur manages to escape.

Shortly after the Van der Linde gang relocated to Shady Belle, Colm and his gang capture former member Kieran Duffy, decapitate him, and gouge his eyes out before sending his mutilated body back to Dutch's hideout on horseback. There, the O'Driscoll's fired on the Van der Linde gang in an attempt to take them out, but they managed to fight back.

Sometime after Dutch and his men came back from Guarma, Colm was arrested and sentenced to death by hanging in Saint Denis.

Some of his remaining men plotted to rescue him, but they were thwarted by Dutch, Sadie Adler, and Arthur, who watched as Colm met his end at the rope before killing the remnants of his former gang. 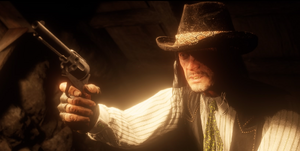 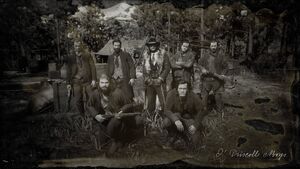 Colm O'Driscoll (Center) standing with a few members of his gang. 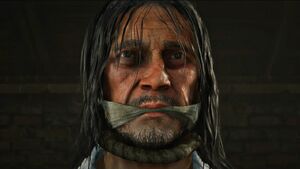 Colm's body after his hanging.