The Colonel is one of the two secondary antagonists (alongside Double) in Mega Man X4. The brother of Iris, he considered Zero as a friend until the General declared war on humans, after that they fought two times (his first fight being in a cutscene, and his second fight as a boss battle between him and Zero). His main weapon is the Laser Sword, which allows him to launch energy at his opponent, although he doesn't yield it when defeated, as he is a Special Stage Boss. In X's route, the Colonel is a proper boss in both fights.

The Colonel is voiced by Matthew Meersbergen.

The Colonel is a serious, hot-headed Repliroid who is dignified. He desires justice and cares for others. Sadly, his pride of the Repliforce and his moral code prevent him from ruining the Repliforce's reputation. This makes him oblivious to the consequences of his actions. He does what he sees is best for the Repliroids, but does not know that the Repliforce is being manipulated by Sigma.

The Colonel is a tall, serious-looking Repliroid. His outfit constists of a black, yellow, white, and red military coat. He wears a hat whose bill points downards.

Colonel is a robot built to serve as the main attack leader of Repliforce, a military group of Maverick Hunters.

Originally he and his sister were planned to be one robot, but they were separated because his power was too high to sustain.

After sky lagoon was destroyed by Mavericks, he went to save his sister but he was confronted by X and Zero which they told him that the humans thinks that the member of his unit are all Mavericks and he must come to the H.Q, he refused because the Repliforce prefers war over dishonor and shame.

After that he fought against X and Zero at the Memorial Hall, declaring that he will stop anyone who tried to interfere with Repliforce's independence.

He died fighting Zero in the Space Port, telling him that Iris needs to know that her brother died happily. 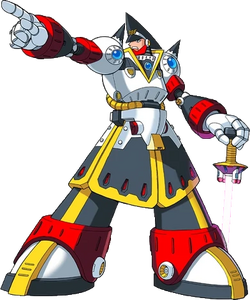 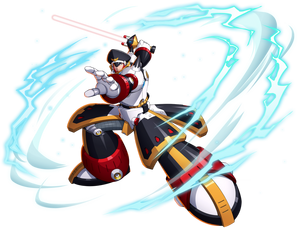