Devour Galactus to acquire his Power Cosmic.
Help to protect New Wakanda from the Zombie Galacti (all succeeded).

Colonel America is one of the first heroes to be infected by the zombie plague. He and the other Avengers then decide to attack the citizens due to the hunger. However, not long after they start, Colonel America tells the Avengers to stop as there may be a cure and tells them to return to Avengers Mansion. However, once they arrive, they are taken by the hunger yet again and devour Jarvis. Soon Giant-Man arrives and the Avengers tell him that they're giving up the fight.

Not only does Colonel America miss out on eating Magneto, but half his brain is destroyed by his own shield. Colonel America does manage to eat the Silver Surfer, but he fails to eat Galactus because Red Skull ripped out his brains. Spider-Man avenges him shortly after, which is ironic as Colonel America was the zombie who infected him.

Colonel America is somewhat revived when his brain is placed in the body of Black Panther's deceased son. However, Colonel America's previous hunger for flesh is replaced by a hunger for battle. However, through these acts, Colonel America is able to redeem himself. It is unknown what happened to him after he was sent to Earth-Z, but it can be assumed he was killed with the other zombies or is still alive somewhere in Earth-91126 but with nothing more to eat. 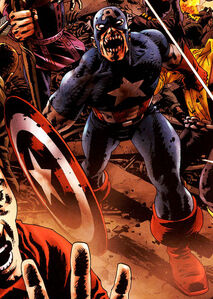 Colonel during the infection. 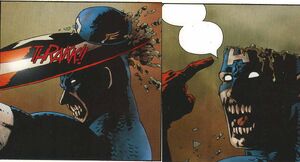 Colonel's head being sliced by Magneto. 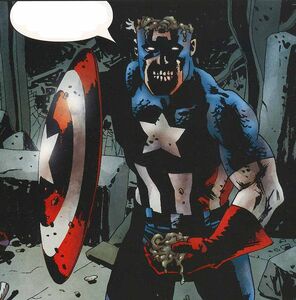 Colonel caring some of his brains. 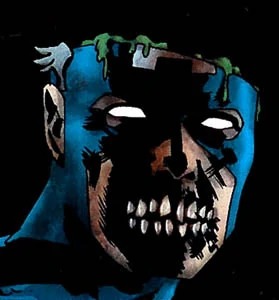 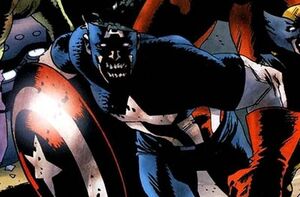 Colonel in his new body. 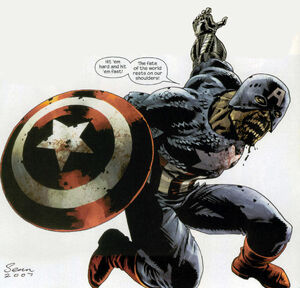 Colonel ready for battle.
Add a photo to this gallery

Retrieved from "https://villains.fandom.com/wiki/Colonel_America?oldid=3728485"
Community content is available under CC-BY-SA unless otherwise noted.