Destroy the Brotherhood of Steel (failed).

Defeat the Lone Wanderer (failed).
Rebuild a new United States (failed).
Increase the power of the Enclave in the USA (failed).
Use the purifier of water for the Enclave's purpose (failed).

Colonel Augustus Autumn is the secondary antagonist of Fallout 3. He is the Enclave's military commander, who is also the son of a high-ranking Enclave scientist who worked at the Oil Rig from Fallout 2. Autumn is the right-hand man of John Henry Eden, and is also the only one who knows the truth about Eden. Autumn is extremely ruthless, not hesitating to kill any who oppose him. He is also highly intelligent, knowing exactly when to ambush his enemies and how to defeat an opponent. He also seems to be using Eden as a puppet ruler, while he has full command of the Enclave.

He was voiced by the late Peter Gil.

Colonel Autumn first appears when the Enclave attack the Jefferson Memorial where the water purifier is. He corners the Lone Wanderer's father and demands he surrender the purifier to the Enclave, but James overloads the purifier with deadly radiation to stop the Enclave from taking it, killing himself in the process and seemingly killing Autumn as well. However, Colonel Autumn actually survived by injecting himself with a special anti-radiation vaccine at the last second, unknown to the player and their allies.

Much later, Colonel Autumn knocks the Lone Wanderer out with a grenade booby trap in Vault 87 after they retrieve the G.E.C.K., which unlocks the purifier, and are trying to leave. He takes them to the Enclave base of Raven Rock and interrogates them for the G.E.C.K. access code. If he is actually given him the code, he'll kill the Lone Wanderer, but if denied Autumn will let them go when the president says over the intercom that he wants to talk to the Wanderer.

While the Lone Wanderer is told by the president to infect the water purifier with the F.E.V. and then most likely destroys him, Colonel Autumn meanwhile convinces the rest of the Enclave to not listen to the president (whose plan would actually kill everyone in the Capital Wasteland except the Enclave, which is too extreme for even him) and to stop the Lone Wanderer from getting into the Jefferson Memorial at all costs. Inside the water purifier room, Autumn makes one last attempt to personally stop the Lone Wanderer. It is here that they must stop him once and for all. Alternatively, it is possible to reason with Autumn and make him leave peacefully with a high enough Speech skill.

Colonel Autumn is briefly mentioned by ED-E's audio recordings in the Add-On Lonesome Road by Enclave scientist Whitley who was ordered by Autumn to disassemble ED-E to make Hellfire Power armor. 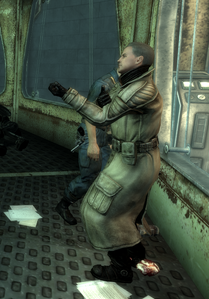 Colonel Autumn injecting himself with an unknown substance to survive the radiation in Project Purity. 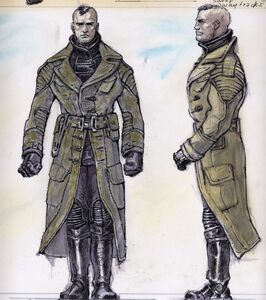